This book is one of the first Dear Canada books I read, and it still stands up after all these years. (Almost ten!) It’s so good that I recommend it to adult readers looking for an intro to the filles du roi story (as we discussed last week, there’s a severe dearth of adult historical fiction on the topic). 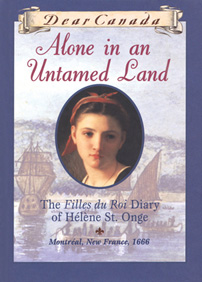 Also as I mentioned last week, the basic plots of this is pretty similar to The King’s Daughter, probably because there are only so many places you can go with this idea. The young women who were selected had no families or were too impoverished to be picky, they traveled a long way, and something like 99% of them got married to voyageurs, merchants, or soldiers, and had huge families. This has an interestingly weird subplot, though, but we’ll get to that in due time.

Hélène St. Onge is thirteen years old and orphaned following the death of her father the previous winter. She lives with her older sister, Catherine, in their home, even though they can’t really pay their bills after his death. They have a cousin in New France who married a woman and then immediately died, and Catherine is engaged to a young man named Armand, who also lives in New France and whose father is an old family friend. So they already have ties to New France, and it’s not entirely surprising when their cousin and guardian offers to ship them over to New France on the king’s dime , although Catherine balks at allowing Hélène to do it too, citing the fact that she’s only thirteen. But Catherine packs up and they’re both off to Montreal within twenty pages. I like a nice brisk start to the plot without too much dicking around in the backstory.

END_OF_DOCUMENT_TOKEN_TO_BE_REPLACED

This is a tiny bit older than most of the books I review, but it’s (for once) really great and I could not pass it by. 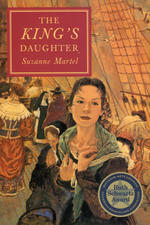 For whatever reason, the Brides of New France are not a fascinating topic for novels and media, which is totally baffling to me. I wrote an article for the Toast on them in 2013, and it absolutely boggles my mind how little popular fiction exists about the topic! (Yes, I read Bride of New France, and no, it was irredeemably awful.) When I read The King’s Daughter for the first time, I thought “Aha! Here is a novel that covers the topic well!” but I only wish there was an equivalent for adult readers that was handled with grace and detail.

Part of the reason I don’t understand the lack of good media is because the premise is ready-made for romance novels, and this is no exception. Jeanne, the protagonist, has been living in a convent (as was normal in 17th-century France for orphans) since she was ten, and has the standard Wild-And-Free personality doled out to most YA heroines of the 70s and 80s. So she’s ludicrously excited to be chosen as a fille du roi and sent to New France along with her friend Marie, and is thoroughly convinced she’s going to find a dashing officer to marry. (Spoiler alert: No.) Marie, though, already has a cousin living in New France who wants a new wife after the death of his first wife, and he sends a letter to Marie asking her to come and marry him. Easy peasy lemon squeezy. So off they go, along with Marguerite Bourgeoys, who is in charge of these women and returning to New France after a two-year break back in regular France.

END_OF_DOCUMENT_TOKEN_TO_BE_REPLACED

Apparently, it’s CanCon November! All Canadian content, all the time. Here’s something nice and cheery just in time for Remembrance Day.

Let’s get one thing straight: Jean Little is a Canadian treasure. If you’re American, like I am, and didn’t discover her works until later, you are absolutely missing out. She’s written several Dear Canada novels and they’re all spectacular, a ridiculous number of other great books, and teaches children’s literature at Guelph. She’s amazing and touches on really horrible issues and problems, but she writes so beautifully and clearly—there are some novelists who write about child abuse or disabilities for a children’s audience, but they can be stilted or awkward—for Jean Little, never. She handles everything with such a deft and beautiful touch.

That being said, this is an incredibly hard book to review. I think as a rule Dear Canada books tend to shy away less and are less flinching when it comes to illness and death, and this is a terrific example. While in Dear America books death comes in the background or to a tertiary character, in DC books there’s no hiding from it. It’s more realistic, in its way, but it’s also much more difficult to read. This book focuses on the Spanish Flu epidemic, but there’s another one that touches on the polio epidemic in the 40s that I’ll get to eventually, and it is brutal and totally straightforward. The protagonist is twelve years old, but honestly, I would have had a tough time with this book at age twelve.

END_OF_DOCUMENT_TOKEN_TO_BE_REPLACED

Why do I keep torturing myself with books about trains? Also, the girl on the painting in the cover of this book bears a striking resemblance to Ben Franklin, which is unfortunate. I think it’s the bow. 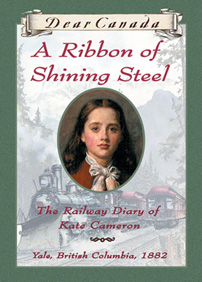 Julie Lawson is a terrific author. She’s written some really great books for kids and young adults. But this book has exactly the same problem as last week’s book, which is that railroads are really freaking boring and not even stellar authors can make them interesting to me. However, the saving grace in this book is that Lawson has created a really interesting character in Kate, and a really interesting family and background to go along with her. (If you’re wondering, Yale is a very small town today a few hours into the interior of BC, and if Google is anything to go by, it’s spectacularly beautiful mountain country.)

One of the main reasons I like Kate in this book so much is that she’s a very active and energetic girl, but Lawson studiously avoids the very common trap of “My young female character has to be relatable to girls today, so she’ll just be a tomboy who hates sewing and other feminine chores and is just like one of the boys, done.” Kate likes to be outdoors with her brothers, but she also wants to be an accomplished young lady and goes through a lot of struggle and misery trying to achieve that vaunted status. But while in lots of terrible books, the girls go to a lot of trouble to denounce femininity, Kate wants to be ladylike but also to have adventures. It’s a really nice balance.