I’ve only read this once before, and I have Thoughts. They’re mostly not all that good. 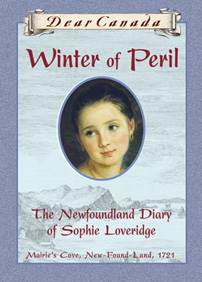 My first question is why? Newfoundland has such a long, storied history with such great stories in it that I don’t know why Andrews opted to focus on this one. I would have guessed, if it had been up to me, that for the Newfoundland entry Dear Canada would have opted for a slice-of-life style diary (think Days of Toil and Tears) about life in an outport fishing village sometime in the mid-1800s, which would probably be the most iconic. Or maybe a Second World War story about the Battle of the Atlantic, or joining Canada in 1949, or even (and stay with me here) a story about the Viking settlement at L’anse-aux-Meadows! (Too out there? Probably.) I love Newfoundland A LOT and just returned from an extremely agreeable weekend there, so I’m favourably disposed to like it this story, but for whatever reason both Newfie entries in Dear Canada end up falling flat. (The other being Smoke and Ashes, which is relatively new and about the fire of St. John’s in 1892.)

At any rate, what we have here is a fairly classic fish-out-of-water story about a wealthy girl from Dorset who comes to Newfoundland with her parents, who are equally wealthy and out-of-touch, and they stay over during a harsh winter. You’d think there’s room for an engaging story there, but ultimately it falls fairly flat despite an awful lot of drama. Maybe it’s just me because I don’t care for Sophie’s voice, but overall, this one was not a win for me.

END_OF_DOCUMENT_TOKEN_TO_BE_REPLACED

Now we’re into serious Deep Cuts territory, very deep into the canon. This is For Serious Fans Only. 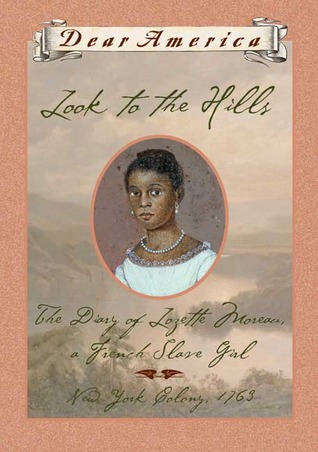 Now, okay. It pains me to say this because I really love Patricia McKissack and I think she’s great. (I would have liked it better if they had more than one author to write about black characters in Dear America, but she was the only one until the rebooted editions, when they had a story about a girl at an integrated school in the 1950s.) And I enjoyed that it covered a different aspect of the French and Indian War, even though it takes place the exact same year as Standing in the Light (which is a pretty standard captivity narrative, that I’ll get to in a different entry). But. But.

This book is just not all that interesting. I know. I hate it too. But it is dull. And it has no reason to be, because it’s a really thrilling story, with a lot of real-life influences, and a lot of really interesting reflections on slavery and freedom, but it just never really comes together and sings. All the components are there—interesting and flawed characters, an engaging story, deep thoughts. It just doesn’t quite cross the barrier, which is a real shame.

END_OF_DOCUMENT_TOKEN_TO_BE_REPLACED

I can’t believe we’re almost done with the Royal Diaries as well! Wow, time is flying by.

Now, here is something interesting. This is the only Royal Diaries book that closely intersects with a regular Dear America book (that being A Journey To The New World, which takes place in 1620-1621, and mentions a number of the same people). I know that doesn’t have a lot of bearing on anything, but I find it very interesting that as their pick for a North American native royal, they chose one whose territory already intersected with the very, very first Dear America book! Interesting, no? (You can say no, and I will understand.) At any rate, it’s a little bit difficult to find a leader in that vein (although they did do Anacaona for Haiti, and Kaiulani for Hawaii, but both of those are out of the realm that people usually consider “Native American princesses”) without doing Pocahontas, which I’m sure would have been a problem given the movie had come out just a couple of years before and also the story of Pocahontas is such well-travelled territory. (Although that didn’t stop them from doing, say, Cleopatra!) Anyway, you know who would have been an interesting choice? Nonhelema, the Shawnee chief who played a role in the American Revolution. I digress already.

As I’ve mentioned before, it’s difficult for authors who are dealing with illiterate protagonists in a diary-based novel series to come up with a way for them to “write their thoughts,” so the concept we’re dealing with here is twofold: Weetamoo occasionally will draw small sketches of her thoughts on birchbark, and these sketches are a way for her to “think about things.” On the one hand, it’s an interesting way to sort of peep into the mind, but on the other hand, is it all that effective? Let’s read and see.

END_OF_DOCUMENT_TOKEN_TO_BE_REPLACED

I hear you! Believe me, I hear you, and I also think Sunfire is the most hilariously awful crap to grace the pages of “books” in many years. This one promises to be especially bad, since it contains actual, real historical people. Probably depicted poorly, I’ll hazard a guess.

Before you start, “Merrie” is a variant on Mary. If you’re like me and stood there goggling at it going “What the fuck?” for a few minutes. I already don’t have a good feeling about this book. Also, the cover is atrocious—Merrie has some kind of wild cape going on with an oddly-Victorian-looking merlot gown, while there’s two dudes: one wearing a…scarf around his neck and what appears to be blue jeans with one of those blousy pirate shirts? And the other wearing a Pilgrim getup that looks like it was purchased from Crazy Frank’s Halloween House Of Fun. He’s even clutching a buckled hat. Helpful hint: the Pilgrims wore normal clothing for their day, including all the colours, and didn’t wear buckles on their hats.

And starting this book I already don’t think I’m going to like Merrie. The whole premise of this book is that she’s stowed away on the Mayflower to escape an arranged marriage. Except she’s supposed to come from wealth, which means that she would have been brought up with the idea that marriage would not be strictly a love match, and secondly, why the Mayflower of all the godforsaken ships in England? Surely you could find a ship going somewhere warm and not a completely isolated place in the middle of nowhere. Anyway, Merrie is discovered on page six and we’re ready to rock and roll.

END_OF_DOCUMENT_TOKEN_TO_BE_REPLACED

The only thing—literally the only thing at all—I remembered about this book was the cover, because there was a copy in my library growing up and I thought the girl on the front was a vengeful ghost spirit or something. Can I also note that the cover blurb “Related with all the impact of a hard-hitting documentary” is A) false and B) not a great pull quote, either?

As this blog goes on and on we delve deeper and deeper into the realms of “that book? Who even remembers that book?” and this falls pretty squarely into that category. I know I read it as a kid because I remembered the cover, but I had zero memory of it. It was for the best. Now I’ve read it as an adult and I have to have the memory of it forever, which may possibly be worse.

First of all, everything about this book is strange. It’s based on an allegedly true story, which is that Regina Leininger, who was a Pennsylvania German girl taken from her family home during an Indian raid and lived in captivity with a tribe for many years, and was returned to her mother after many years and recognized her only after her mother sang “Alone Yet Not Alone Am I,” which was a hymn the family had sung together. That’s it. That’s the whole story. Now, you may think that it’s ripe for drama and entertainment, but this story fails to deliver any of it. But don’t worry, let me tell you all about it in detail.

END_OF_DOCUMENT_TOKEN_TO_BE_REPLACED

God, I hated this book. I should start a tag expressly for books I hate, so people can better hate-read along with me. (Would you rather read about me hate-reading books, or gushing about books I think are amazing? There seems to be no middle ground.) 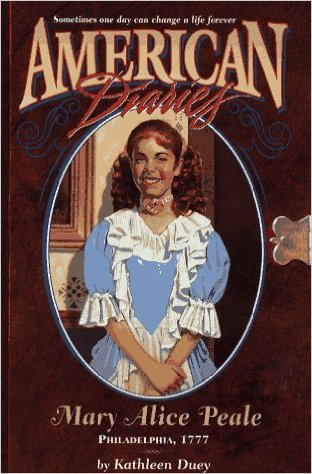 I picked this book specifically because the cover art is so, so, so bad. God, I hope a real girl didn’t sit as the model for this, because how very dreadful. Besides having a pretty bad face the artist has thoughtfully accessorized with a “WTF” hairstyle and a gift-wrap bow around her neck. The whole thing has the air of “Colonial family if they had access to a camera and delighted in taking awkward photos of their children.”

Anyway, this book is almost exactly as bad as the last one. The premise is that the Peale family is a wealthy Loyalist family in Philadelphia, but Mary’s older brother has gone off to fight for the patriot cause, causing a lot of drama and strife in their family. They haven’t heard from him in some time, and Philadelphia is being occupied by the British army, so Mary’s older sisters are pretty obsessed with finding officers to marry. I know this sounds promising, but trust me: it is definitely not.