I decided to stop torturing myself with Barry Denenberg novels for a bit, so here’s a genuinely very good book.

By the time this one came out I was a little bit too old, so I didn’t discover this one until I re-discovered the Dear America novels in my 20s. (And very glad to do so!) Which is a shame, because it’s definitely one of the best novels in the series. It touches on a lot of the issues that historians think the witch trials may have actually been caused by—economic stress, inter-familial problems, and so on—but it’s handled in a very deft way that a teenager would probably understand (but actually, a teenager reading for the first time probably wouldn’t pick up on it, so it’s a bit of Adult Reader Bonus, and even in the historical note at the end it’s not as extensive as one might though).

END_OF_DOCUMENT_TOKEN_TO_BE_REPLACED

Another classic that I had very little memory of, but on rereading it all came screaming back to me. I must have read this a dozen times as a kid during my American Revolution phase.

Parts of this went a bit over my head as a kid, but I remember enjoying it a lot nonetheless. The picture is pretty bad, but this is the cover of the book I had—I guess it was re-released recently with an ugly cover, and I actually quite like the one I had. This is another book in the Teenage Girl Falls In Love With Soldier From The Other Side genre that I so dearly loved, but man, it was not as interesting this time around.

END_OF_DOCUMENT_TOKEN_TO_BE_REPLACED

If I’m going to complain about him, I may as well go for my Barry Denenberg completion badge.

Book: When Will This Cruel War Be Over? The Civil War Diary of Emma Simpson, Gordonsville, Virginia, 1864.  Barry Denenberg, 1996. 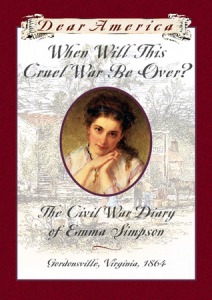 I have never figured out why this is considered one of the classics of the Dear America books, other than it was a fairly early one, dealt with the losing side of the Civil War, and probably consequently wound up being used in several school curriculums. Emma is such a drip that it’s difficult to get through, which is saying something for a book that’s only 152 pages long.

END_OF_DOCUMENT_TOKEN_TO_BE_REPLACED

Here’s a rare example of a book that I not only never read as a kid, but never even heard of.

It’s a little strange I never heard of this one, since I read a lot of Karen Hesse—Out Of the Dust, The Music Of Dolphins, and A Light In The Storm being the big ones. But I came across this one at a used bookstore and I am a gigantic sucker for anything set during the Spanish flu epidemic so I had to get it.

Hannah is a fourteen-year-old Jewish girl who lives in Boston with her two younger sisters, Libbie and Eve, in the care of her Tanta Rose and Rose’s friend Vashti. The girls’ mother has been in Russia for years—originally having returned to care for her own elderly mother, then trapped there by the war—and their father having been drafted earlier that year. Tanta Rose loves them as much as their parents do, but Hannah misses her parents desperately, and loves and resents her little sisters in nearly equal amounts.

END_OF_DOCUMENT_TOKEN_TO_BE_REPLACED

In my opinion, the best Dear America out there. 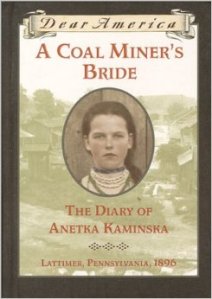 This is a book near and dear to my own heart as a Polish girl, and it’s one of the few DA novels with an older protagonist and a love story that isn’t a complete horrorshow. The historical incident that it deals with is pretty, uh, incidental—it’s a mine strike in the Lattimer coal mines, and it takes place pretty near the end of the book. The bulk of the novel focuses on Anetka coming to America and adapting to her new life as the wife of a man she barely knows.