This is one of those books from my own collection that appears to be very well-loved, but I remember exactly nothing about it. That’s my problem with a lot of Ann Rinaldi books—I remember either nothing or one very specific fact about them, so I think when I read them they just washed in one ear and out the other. 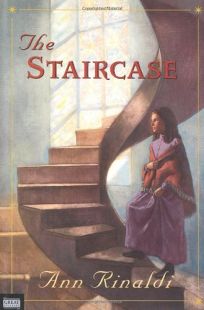 Also it’s obvious this book is from 2000 because it has one of those obnoxious fake-warning labels on the back that says “WARNING: This is a historical fiction novel. Read at your own risk. The writer feels it necessary to alert you to the fact that you might enjoy it.” CRINGE SO HARD. I was twelve when I read this for the first time and even then I was thinking “wow, that’s not cool at all. How lame is that?” and it does NOT hold up. Anyway, if you’re not familiar with the basic story of The Staircase, it’s a retelling of how the mysterious staircase at the Loretto Chapel in Santa Fe came to be built. The staircase twists like a helix, but has no means of support, and the nuns attributed it to St. Joseph. (This is not a spoiler, this is the basic premise of the book.)

Interestingly, Ann Rinaldi’s books are usually based on something a bit broader than “this one freaky staircase,” but it does have a lot of detail about life in the Southwest in the period, and there are some interesting bits about convent life. However, the worst part of this book is that the protagonist, Lizzy, is a textbook I’m Not Like Other Girls, Other Girls Are Just Stupid girl. And I hate that—I think it’s a genuinely poisonous attitude that is pernicious in a lot of fiction, especially and particularly historical fiction from this time period. (By which I mean, the 1980s/1990s/2000s, not…the mid-to-late Victorian period.) It’s a cheap and easy way for the author to signal that the protagonist or whoever is active, modern, and up-to-date in thoughts and attitudes (by the fact that other girls are “stupid” or “simpering” or what have you thanks to their interest in temporally-accurate activities like sewing or cooking), but it’s really presentist and I also really hate how it pits young women against each other. I have a lot of things to say about this, but there’s a full article in there and I don’t want to get too far off track of this specific review.

END_OF_DOCUMENT_TOKEN_TO_BE_REPLACED

I’ve been deliberately skipping the My Name is America books because I think they’re boring, but here’s one that’s pretty interesting (written by the same guy who wrote Sean Sullivan, which could win awards for being boring). 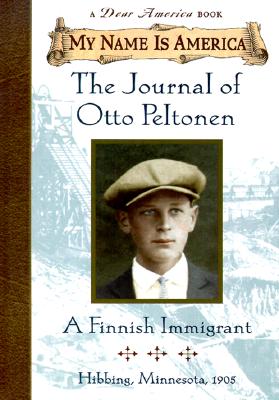 Why don’t the MNIA books get clever titles? It’s so dull. They relaunched the series in 2012 and did give them titles, which is cool, but this one was not chosen for reissue and hence didn’t get a new title. My copy does have a fold-out section at the back with a cross-section map of an iron mine, which is pretty cool, though. Interestingly, the books across all the series tend to have a strong pro-union bias, which pops up in this book (as we shall see) as well as the newsie diary set in 1899, the Dear America novel Hear My Sorrow about shirtwaist workers, A Coal Miner’s Bride (again with the mining!), and to a lesser extent in Days of Toil and Tears (Dear Canada).

The other thing that tends to be a bit less engaging about the MNIA (and I Am Canada, etc.,) is that they need to be focused on older boys in order to effectively be a part of the story (generally: war, or work, and it’s a real stretch to get an 11-year-old protagonist involved in a war that’s not on the home front). But that is frustrating in itself—the books are targeted at younger boys, but the protagonists are older, which isn’t strange, but it ends up reading as a strange mishmash between the two ages. Eventually I am going to get around to reviewing I Am Canada, which suffers from a lot of the same issues, but in the meantime I will just say that if you’re going to write series about girls where they experience the war at home, you can do that with boys, too. Plenty of young teenage and preteen boys experienced wars and social upheaval at home, without having to go Be In It! That’s a valid plot for a book, too! But the only MNIA that really covers this is one where there’s a kid who’s a witness to the Battle of Fredericksburg, and they already had a journal about a Civil War soldier anyhow.

END_OF_DOCUMENT_TOKEN_TO_BE_REPLACED

Let’s get something straight right off the bat here: I hated this book, more than any other Royal Diaries book that’s out there. I hated it when I read it as a teenager and I hated it now. 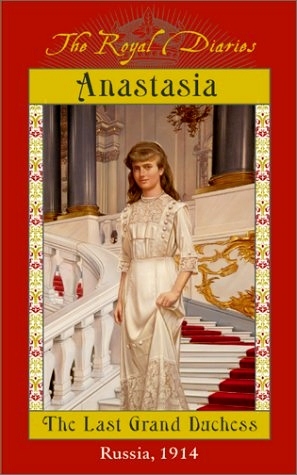 I wouldn’t go so far to say that it’s bad, exactly. Not in the sense that it’s a poorly-written pile of dreck or anything. It’s perfectly competently written, it just completely fails at walking the line between innocently naïve and foreshadowing, and tone-deafness. However, part of the reason that I disliked it so strongly was because I listened to the audiobook version of this, read by Rene Raudman. Now, she is a great audiobook reader, and I don’t know if it was intentional, but she manages to imbue Anastasia with a sort of slightly whiny, over-privileged tone that really just creates this sense of snottiness that feels indicative of nobility.

And what’s more, this is a terrible cover. Poor Anastasia looks like a melted doll. This was reissued a couple of years ago but that cover is even worse, so I’m choosing to pretend it never happened.

Now, I think this was an interesting choice, since the only other Royal Diaries book that is poised right on the brink of revolution is Marie Antoinette, but that one feels to me to be slightly less tone-deaf. In this one, though, Anastasia is so focused on how awesome her dad is and how nobody could possibly think that anything other than absolute imperial rule would ever, ever work, that it ends up flying right past “interesting foreshadowing” and heading into “hit you over the head with it” territory. The thing is, the one thing absolutely everybody knows about Anastasia is that she was part of the last imperial family of Russia and grew up in magnificent splendour, and that she was executed with her family following the revolution of 1917, and that she was rumoured to have escaped. But while Marie Antoinette’s book is handled with some grace and real understanding, this novel just comes across as….head-turningly naïve. I understand it as a stylistic choice, but I think it’s a slightly strange one and I don’t know how well it comes through.

END_OF_DOCUMENT_TOKEN_TO_BE_REPLACED

Happy New Year! And welcome to another year of revisiting these classics and trash. This week is a classic to start the year off in the best way.

This is aimed at a little bit younger than the books I usually review, but I can’t possibly ignore it. It’s such a classic of the genre! It was a staple in every school library, on every classroom bookshelf, at every book fair, etc. etc., and so on. I haven’t probably touched this book in seventeen years or so, but it’s amazing the things that I remembered. 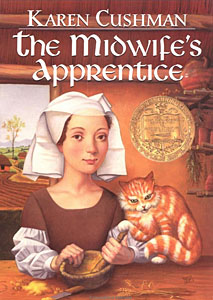 In case you don’t remember the basic premise of this book, it’s about a homeless girl in the Middle Ages, who literally lives in a dung heap. She has no family and no friends and no one to look after her, and she cuddles down in the dung heap to keep warm. This is also the first place I learned that rotting hay and stuff got warm and could conceivably be a place to stay if necessary, which featured in many of my childhood imaginings about what would happen if I got transported back to the Middle Ages. (I was a weird kid, don’t judge me.) She has no name, so everyone calls her Brat, except for the mean village boys, who call her Beetle. So already we’re working with a super cheery premise for a kids’ book.

END_OF_DOCUMENT_TOKEN_TO_BE_REPLACED

Happy New Year, YAHV readers! This blog is celebrating its one-year anniversary, and my URL has changed to yahistoricalvault.com–please update your bookmarks if necessary!

Thanks for reading, and I have a really great year of more young adult trash and treasures coming up for all of us!