I have no memory of this book, but it’s a Civil War book so I imagine it’s going to be a great big bundle of presentism and irritating bits about race all wrapped up with a poorly-thought-out romance arc. 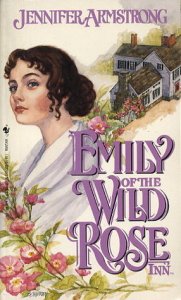 At the beginning, we learn that Emily Mackenzie is the current sixteen-year-old resident of the Wild Rose Inn, as is the sixteen-year-old Lucy Sykes, a black girl who is Emily’s best friend slash foster sister. Apparently a scarlet fever killed both Emily’s mother and Lucy’s parents when they were three, although exactly how Lucy came to live with them is not made clear.

They’re out sailing, as is Micah Handy, the current Handy son, who seems to be just as arrogant as the rest of the Handy clan. Although the Handy’s inn seems to have experienced a rapid turnaround, since they’re doing quite well now, and Micah is out in his own sailboat showing off to some other girls. Emily is apparently not the sailor she thinks she is, since the boom clocks her and knocks her right into the water. Lucy rescues her and their talk turns to abolition, as people frequently do when they have nearly drowned, and they see a flag back at their inn signaling that they’re needed at home. I’m sensing a theme here that 16-year-old girls are not keen on doing their damn work.

END_OF_DOCUMENT_TOKEN_TO_BE_REPLACED

I keep running into Barry Denenberg books, almost against my will. One of these days this is just going to turn into a Dear America/Canada/Royal Diaries/My Name Is America review blog.

Mirror, Mirror on the Wall: The Diary of Bess Brennan, Perkins School for the Blind, 1932, Barry Denenberg, 2002.

Before we get started, there’s a few things about this book that set it apart. First, it’s told by a set of twins—Bess, the protagonist, and her twin sister Elin. Because Bess is blind, she dictates to Elin, who writes, and there are a number of passages by Elin as well, which lends it a more epistolary feeling than most. And secondly, the protagonist is blind, which could have fairly easily shoehorned this into a “learning about disabilities” book, but it happily escapes that fate. There are appallingly few books focusing on protagonists with disabilities in the kids’ and YA canon, and I’m very pleased to see this addition, but like most of Barry Denenberg’s books, it has its issues.

END_OF_DOCUMENT_TOKEN_TO_BE_REPLACED

This is one of my least favourite Dear Americas, but I’ll plug through it as it’s short.

This is another Barry Denenberg, because I figured while I was doing World War Two I may as well hit another one of the lowlights. His voice is so similar that almost all of his female characters end up sounding very similar, which bugs me a lot, but whatever.

END_OF_DOCUMENT_TOKEN_TO_BE_REPLACED

This novel has everything a nerdy teenager could want: melodrama, love triangles, Nazis, sabotage, and large explosions.

Hindenburg 1937, Cameron Dokey, 1999. (And check out this cover: how’s that for your soft-focus love-triangle drama?)

Cameron Dokey was the author of those atrocious Hearts and Dreams books, and this one is very similar in tone. However, it is far more exciting and has significantly less sturm und drang about being “misunderstood,” though. It’s part of a “series” that are really just loosely connected books, the first one being that god-awful Louisiana Hurricane book from a few weeks ago, the next one being about an avalanche in Colorado, and there’s also a Chicago Fire one I have not been able to lay my hands on, more’s the pity.

Anyway, our protagonist Anna opens the book at the bedside of her dying and beloved grandfather. She fills the time by his bedside contemplating what a dickhole her older brother Kurt has become ever since joining the army (to be clear, Germany’s army in 1937) and getting on her case about not being an example to the Fatherland. We don’t have to dwell too much on Kurt’s character here (Cameron Dokey clearly didn’t), you can pretty much imagine your “stock Nazi asshole” character here and it’ll be basically the same thing.