Reading this book is like an extremely frustrating exercise where you really, really, really want to like the protagonist but you can’t because she’s written so terribly un­sympathetically you could cry. 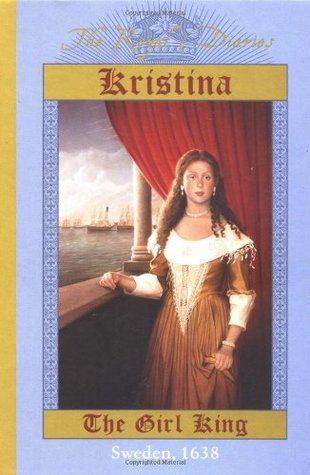 This is actually the same problem I have with a lot of Carolyn Meyer’s heroines, where they’re so obviously intended to be. Her book on Anastasia is exactly the same way. Maybe I just have very little patience! That’s true, but I’m not sure if it’s relevant here.

Kristina is one of the most fascinating people in European history—raised to be a king, abdicated her throne at only twenty-eight and converted to Catholicism, traveled Europe extensively, and then died and was buried at the Vatican. Her gender identity and sexual identity have been heavily, heavily, heavily discussed in the four centuries or so since her death, and there’s a couple intriguing hints here but nothing major either way. Which is fair, because Kristina is only about thirteen here, but it’s an interesting way to look back at it!

Also irritating is the way the Tre Kronor castle is continually referred to as the “Castle of the Three Crowns,” because I think we could have definitely made that connection. Anyways, Kristina lives there with her aunt and cousins and hasn’t seen her mother in years, because her mother is a crazy person who hates Kristina for not being a boy and never really got over her husband’s death. Ever since his death, Kristina has been the king, not the queen (king being the ruler and queen being the consort), and is still undergoing her training and trying to balance her crazy mom and her studies.

One of the things that bugs me the most about this book is Kristina’s arrogance. She’s very, very stuck up about being king rather than queen, and while this could be  an interesting deconstruction about how awful teenagers are when they think they know everything, it doesn’t quite go far enough for that. Instead it’s stuck in annoying territory. “How can anyone ‘truly enjoy’ such a meaningless pastime [as embroidery]?” I don’t know, maybe the fact that creating things with your hands can be enjoyable and satisfying? Shut up, Kristina. (I’m the worst.)

The council of Sweden are not fans of Kristina’s mother, to say the absolute least. They think she’s unbalanced and hates Sweden, since she’s a German princess, and they kind of have a point because she does. But since she lives far from Kristina, Kristina is free to focus on learning to fence and go riding disguised as a boy with her cousins. She’s fairly close to one of them, Karl, who is heading off on a tour of Europe, but one of her teachers floats the idea that his family may want them to marry one day so he can be king, which sends Kristina into a fit of fidgets.

Said crazy mom sends Kristina a letter saying she’s desperate to see her only beloved child again, and Kristina grudgingly agrees to see her at some point in the future. She keeps putting it off and putting it off until the fall, when she has no choice but to head out for a visit—and along the way she meets Ebba Sparre, a very beautiful daughter of one of the members of the Riksdag. Ebba is widely speculated to be Kristina’s longtime lover, which isn’t really touched on here (obviously) except for the fact that Kristina is pretty fascinated with her.

While Kristina is visiting her mother, said mother spends most of her time berating Kristina for being unkempt and unruly and generally unfeminine and unbecoming, or discussing the options she’s selected for Kristina’s future husbands.  They’re there for two dreadful months, and then head back to Stockholm, and Kristina notes that she didn’t cry at all at leaving her mother but certainly did when she had to leave Ebba along the way!

On her return, Kristina’s other teachers are also making noises about Kristina’s eventual marriage and heirs, which is of course something that interests her not at all and she’s specifically trying to avoid. She’s much more interested in the new things coming out of Europe, like ballet and fencing and the languages of the continent. (Although that’s not a new thing, but you know what I mean.) She thinks England is a cultureless wasteland, but she admires Elizabeth I for being able to put off marriage until she was too old for it to matter. Clever, she thinks! (I guess abdicating the throne entirely takes care of that issue, though.)

By Christmastime, Kristina’s beloved Aunt Katarina is feeling poorly, but this comes secondary to the other things going on—Kristina beats Karl in a fencing duel, she visits the dungeons and is horrified, she has her regular school exams (“as usual, I left them all deeply impressed by the extent of my knowledge.”) Ebba and her family come for a visit when the Riksdag convenes, which thrills Kristina for two reasons: she loves to be on the throne and in charge, and she loves Ebba.

Katarina is growing more and more ill, but church brings Kristina no relief or enjoyment—“I have heard that the Roman Catholic church is a much more cheerful place than our dour and gloomy Lutheran houses of worship.” This is true, Catholics know how to party. Ebba tries to cheer Kristina up by telling her she’s beautiful and noble-looking, and also that Karl is in love with her, which horrifies her. She says she would rather travel and do all the things men can do, but Ebba says she has no interest in that—which Kristina can’t understand. You know, Kristina exhibits absolutely no empathy of any kind for anyone in this book, on any level, to the point where I wonder if this could be a subtle way of demonstrating that Kristina has no interest in anyone but herself. Who knows. It makes me crazy, though.

Around about March, Kristina’s mother starts trying to get her to come for another visit and saying that everyone hates her and is deliberately being cruel to her. Maybe they are! She seems like she kind of sucks! Kristina keeps putting it off by saying she can’t possibly leave Katarina when she’s growing so ill and Karl, her son, has left again and she has no one else. On Katarina’s deathbed she asks Kristina to marry Karl as her very last words. Man, I don’t like Kristina here, but this really does put her in a bad situation. Now she has no one who is really her mother, and she still doesn’t ever want to get married but she promised her dying aunt she would, and so on.

While she is grieving, Kristina’s mother writes to the king of Denmark—Sweden’s greatest enemy—begging them to allow her to go there and be protected, since Sweden is so horrible—and probably marry the king while she’s there, her late husband’s lifelong enemy. Kristina writes to her immediately, inviting her to Stockholm to keep her from going to Denmark instead. She comes, claiming that she just wanted to pass through Denmark on the way to go back to Germany, and asks if she can’t go back to Germany if she can go to the royal castle at Nykoping—which is pretty close to one of Denmark’s islands, coincidentally. After consulting with her advisors, Kristina has her sent back to Gripsholm, and when she writes to Ebba complaining of all her troubles, she complains that Ebba doesn’t tell her anything about her only life and only exhibits sympathy. Shut up, Kristina, she was trying to be nice.

Once her mother goes back to Gripsholm, she immediately flees to Denmark. Of course. Who did not see this coming. Kristina falls terribly ill for more than a month, and when she recovers she learns that her mother did get to Germany after all.

Kristina addresses her council when they agree to seize her mother’s property, and says she will support her mother out of her own purse because she’s her own responsibility. She then asks to go out on a long trip around Sweden, to get to know her subjects, and begin to attend council meetings and take on a larger role in preparation for her eventual rule.

Rating: D. This may be the worst rating I’ve given any Royal Diaries book. Normally I like them very much, and Kristina is really such an all-around fascinating character that I feel this is a major fail. I think part of it is that Kristina is so very unlikeable—and I’m certainly not against unlikeability in narrators! But I wonder if it was really deployed correctly here, or if worse, she was intended to be a sympathetic character and it came across poorly. I think the latter is more likely—Kristina suffers from ongoing nightmares related to her father’s death and her crazy mother’s crazy grieving process, which is clearly intended to give her character some depth and complexity, but somehow it never melds together. She comes across as stuck-up about her own intellectual prowess, and while I would definitely read a story all about how lonely she was as a girl thanks to the unreasonable workload she was subjected to and how she acted poorly to others as a result of that—this is not that book. I’m disappointed. There is a lot to mine in Kristina’s later life for interest, but we get only the barest hints of it here—she’s much fonder of Ebba than any of her male acquaintances, or she is fascinated by French and Italian art and culture, or she is very interested in Catholicism. It feels more like an Easter egg if you read about her background than really laying the groundwork for who she becomes at a later stage. This is one Royal Diaries book I’d give a pass.