Well, here we are again. With a book that I’m not totally convinced about, but we’re coming to the end of these books (amazingly!) so I had better get this one out of the way. 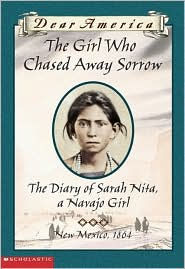 Ann Rinaldi’s turn at this (My Heart Is On The Ground) was absolutely dismal. This one is better, but I couldn’t find a review or critique written by an actual native person, so I can’t speak to anything regarding the actual facts about the Navajo experience from their perspective. Could be completely off-base! I have no idea!

Since our protagonist, Sarah Nita, isn’t/wasn’t literate, the gimmick behind this book is that it’s the transcription of her stories by her granddaughter, who was sent to a white school. (So there you go. She doesn’t die!) It’s always interesting to see the different devices they come up with for books written by illiterate protagonists—I think the Royal Diaries book Weetamoo: Heart of the Pocassets uses the idea that she’s making line drawings on birch skin. Is this better? Yes, but it certainly doesn’t read like “memory,” it reads exactly like any other DA novel, except with “stories” instead of dates. Maybe I’m just being unnecessarily picky! I don’t know. (90% of this blog is just me going “I don’t know.”)

As we begin, Sarah lives with her family in their hogan in what is today Arizona—mother, father, younger sister Kaibah, and dog Silver Coat, near her aunt and uncle and cousins. They’ve been hearing terrible things about how the white men are in Navajo territory, burning their crops and capturing them, but nothing has happened to them so far. She can do nothing but worry and try to cheer up her parents, but it’s too late. When Sarah and her sister are out watching their sheep on a rise, they see white men coming in a cloud, attacking their home, and drive their parents and horses away. Silver Coat is with the girls and won’t allow them to go down the trail—protecting them, yes, but they can’t do anything while their parents are dragged away. “I hear a wounded animal sound that makes me turn around to see where it is coming from. It isn’t Kaibah, it isn’t the dog. It is me.”

Sarah is only thirteen, but it’s up to her to be in charge. They gather up some food and water and their mother’s flint and go to tseyi, the canyons where they have family who will hide them, which she remembers her father saying is a week’s journey north and west. So they set out—alone, with Silver Coat to look out for them, hiding in trees and telling her sister stories so she won’t be afraid. They make it—nine days later—to what is today Canyon de Chelly, but they don’t find anyone right away. It isn’t until two days later they find an old man and old woman with a young girl and boy—they turn out to be family on their father’s side, and they bring them in. Grandmother and Grandfather, their new cousins Partridge Girl and High Jumper, and the rest of the family—Mexican Woman and her month-old daughter, Starlight; her husband Yellow Earrings who was shot by soldiers and is slowly dying; Man with a Lamb Hat and his wife Slim Woman—these are their new family.

It’s winter, and the girls help out their new family by doing chores and playing string games during the long winter nights. They’re there almost a month when Sarah begins to wonder what will happen if the white men come there. High Jumper points out the hiding places deep in the canyons, high above the canyon floor, which doesn’t really calm Sarah’s nerves. Yellow Earrings dies after lingering all that time, and then the white men are spotted at the mouth of the canyon. They pack up all of their things and climb a ladder up the canyon wall—Kaibah is almost too frightened to do it—and wrap up in their blankets. Grandfather climbs back down, hides the ladder, and then climbs back up using only his hands, which makes me want to cry just thinking about it as someone who is petrified of heights.

The white men pour into the canyon and camp below them, while they stay silent and cold, until they see that they’ve managed to capture the other Navajo and are forced to surrender. High Jumper almost refuses to go until Sarah reminds him that he promised to protect her. And then they all set off on the Long Walk.

Well, as if things weren’t depressing enough already (let’s recap: family lost, walked all the way to the canyon, taken in by distant cousins, then captured), they’re going to get much worse. There’s a long, long line of Navajo, most of whom are starving, all marching to the Place of Soldiers—Fort Sumner. Sarah befriends another family with a daughter about her age, Sah-nee, and her grandmother. They’re forced to sleep out in the open (in the snow) on very little food, and everyone is thoroughly miserable. The soldiers give them flour, but don’t tell them how to cook it, so eating it uncooked makes most of them sick. Starlight is growing progressively worse because Aunt doesn’t have enough milk for her.

They walk and walk and walk—everyone growing sicker and sicker. Sah-nee’s grandmother falls behind more and more. The stories Sarah likes to tell aren’t as cheering as they were at the beginning of their walk. People begin to die—Sah-nee’s grandmother, a boy with a cough—and they’re not even allowed to bury them, they’re just abandoned. This is the worst. Kaibah begins to befriend one of the soldiers, which very much upsets Sarah and everyone else—they think she’s betraying them. Then High Jumper disappears, running away with a group of boys who can’t face it anymore. A pregnant woman is shot when she goes into labour. This is the worst. Honestly, I feel like I blocked out a lot of the most depressing stuff when I read this as a kid because I do not remember most of this.

They’re forced to walk across the Rio Grande, and Aunt and Starlight are almost washed away. Just before they come to the fort, High Jumper returns with their goats that were stolen along the way, but Sarah is too preoccupied with the thought that her parents and cousins might be here at the fort, too. They look for days—in between helping to collect the ration food and look after Starlight and keep everything clean. When at last Sarah and Kaibah find their mother, they’re ecstatic, but then they learn that their father is very sick. But whether he’s sick at heart or sick from the long walk, they don’t know.

Sarah is determined to find something to help her father—and she finds some. Unfortunately, it’s undigested corn kernels in horse manure from the soldier’s horses (because of course the horses are getting corn and the people are getting next to nothing). She washes it well and makes sure her father eats it, and Uncle manages to get extra rations by “disguising” himself rot he soldiers—by the amazing trick of removing his hat and changing his hair. “Now we are together, my mother and my father beside me, and Kaibah in front. We are not broken, like a rug that has unraveled or been torn to pieces by violence and sorrow.”

In the epilogue, they stay in the fort four years, which seems horrifying. They return home, where Sarah Nita and High Jumper marry and settle down near Sarah’s parents’ home. They have four children and then grandchildren—one of whom is “writing the story.”

Rating: B+. Okay. Well, here’s the thing. The gimmick didn’t bother me as much as I thought it would, but holy Lord, this book is depressing. It’s well-written, which is nice, and the fact that it’s intended to be memories from a long time ago meant that the lack of development or anything other than straight recounting in the story didn’t bother me. At heart, it’s telling a fundamentally horrible story—the Long Walk and forced deportation of the Navajo people—and one that I knew nothing about as a kid. Certainly it was never covered in any history class I ever took! Sarah is kind of a blank slate as a character—she has glimmers of personality here and there, but really her only thing is telling stories, which she does very well. It works—all of it works very well, and it’s sad, but good all at the same time—but something about it leaves me hanging a bit. There isn’t a terrific resolution at the end, and it seems to be cut a little short. It’s far, far, far better than Ann Rinaldi’s attempt at a story about the Native experience, but I don’t think I’d give it an A.

5 thoughts on “The Girl Who Chased Away Sorrow”