I always complain that these books about boys are boring and dull, but this one was not. Probably because it’s a Kathryn Lasky book, so it’s going to be a good bit above the general run, but I was still genuinely surprised! Incidentally, this book was rereleased with a new title and cover, and you tell me which one is more engaging.

The Journal of Augustus Pelletier, The Lewis and Clark Expedition, 1804, Kathryn Lasky, 2000. 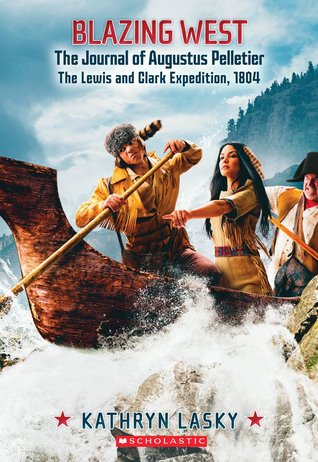 So, here you go. The initial title looks exactly like every other single My Name Is America book, which is not super thrilling, but the reissue is…it’s a little bit pulp-fiction-y, isn’t it? I’m not an 11-year-old boy so I’m probably not the target audience here, but am I wrong? The expressions on everyone’s faces here are hilarious—grinding fury, complete irritation, and what looks like the guy in the back who may have just heard the world’s most hilarious joke. I don’t know what’s happening here.

Gus here, our teenage protagonist, is preparing to secretly follow the Lewis and Clark expedition in search of a little adventure, and his brilliant plan is to wait until they’re too far along to tell him he has to go back. As stupid of an idea as that is, and believe me it is truly dumb, it is definitely something a teenage boy would come up with. He’s half French and half Omaha, calls himself a half-breed, and speaks French, Omaha, and English, which as you imagine might come in handy. He immediately begins complaining about how slow the whole expedition is going, which is not surprising considering that they’re a good bit more clunky than a single teenage boy and his knapsack.

So off they go, and it’s barely a week before Gus is complaining about how good the camp’s meat smells and how much it sucks being alone, which is probably true. The bugs are dreadful, the Corps all come down with dysentery, everything is generally awful. By the end of June, after they’ve travelled just about four hundred miles, Gus presents himself to Lewis, who is wholly unsurprised to see him and excited to have someone else who can write along. The rest of the Corps is flabbergasted to see him, but pretty happy to see someone else, as I can imagine you’d get pretty bored of seeing the same ugly faces all the time.

Gus makes himself useful—he’s off with one of the scouts who gets bitten by a rattlesnake, and Gus does the classic “make an X and suck out the poison,” he nabs some game for them, he helps Lewis take his notes and his measurements. And makes his own salty notes in his own journal. “[Lewis] has gone plumb crazy with this Platte, which in my considered opinion is a lousy excuse for a river. It is great and wide but it slides along barely an inch deep in some places. The thing that Captain Lewis keeps going on about is how much sand there is in this river. Well, I guess if you like rivers made from sand you would fancy this one. I personally prefer water in my rivers.” Well, I laughed! Most of the expedition treats him pretty well, except one, Reed, who treats him like crap—“There’s a way a grown-up half-breed, ‘specially with French blood, can glare, where their brow turns dark just like storm clouds rolling up on the horizon. I’m working on it myself. It’s best with whiskers. I don’t have whiskers yet.”

They see their first Indians near the end of July, a Sioux man whom they send back to his people with the message that they want to meet with them. But they don’t show up until the Corps finds a trader to help translate and take the message again, and Lewis tells them all about Jefferson and brings them the gifts of beads they’ve been hauling along all this way. Once they move on, Reed deserts the party, and is found a couple of weeks later with a few of the chiefs they met with. They court-martial him and sentence him to over a hundred lashes, which sounds dreadful, but he lives. One of the other men dies (of an infected appendix, in real life, although it’s not spelled out in the book)—notably, the only man to die on the trip, which is nothing short of a miracle.

As they travel they meet up with a number of different Indian tribes, see all kinds of different animals (including prairie dogs, which baffle them all, and Gus is charged with taking care of the one they capture, because of course he is), and find a herd of untold thousands of buffalo crossing the plains. One tribe of Teton Sioux they meet with are extremely unimpressed with their ugly beads, and the whole thing nearly comes to blows. They make their way out safely, though not without more danger, and continue west.

Reed, the constant troublemaker, attempts to start a mutiny against the Captains, and is court-martialed again and beaten. Wasn’t once enough? They reach Mandan country by October, and begin to build a fort to winter over in, and this fort is where they meet Toussaint Charbonneau and his two Indian wives, including Sacajawea, the Shoshoni woman who’s going to make sure the rest of the Corps keep their heads attached to their bodies. Sacajawea translates for the Corps, and Charbonneau treats her like garbage even though it’s obvious she’s about to become terribly important.

Over the winter, they hang out with the Mandans on their buffalo hunts, and Gus does his best to explain all of the scientific equipment they have with them to Sacajawea, using his extremely limited sign language and Sacajawea’s French. She has her baby in February, a little boy, and the rest of the Corps prepare their things for the crew to split up—half will go back and take the specimens they’ve collected, and the other half will continue on their way.

At the beginning of April, they pack up and head out, including Sacajawea and the baby and Charbonneau, and Gus complains about Charbonneau being completely useless, which in fairness, he totally is. They pass the Continental Divide, find their first grizzly (after Gus is nearly eaten by one and escapes by swimming away, and the whole group is nearly washed away in a storm in their canoes. They find buffalo jumps and wonderful country of cliffs and mountains and rivers that meet. They need to portage eighteen miles around a falls, which sounds so ungodly awful I can’t even imagine it, and they all nearly die when a squall rolls in and almost washes them all away down a ravine.

Gus is horrified to find that the Rockies are snowy even when they see them in the middle of July, but Sacajawea is thrilled because this means she’s close to the country she grew up in and was taken from as a young girl. The Shoshoni camp that they encounter turns out to be her own family, which is completely true and must be one of the great and magnificent accidents of American history. But because Sacajawea has a white husband now and is so changed from the other women of her tribe, she feels “stuck again somewhere between nations,” as Gus puts it.

The winter that years comes early, in September in the high country of the mountains where they’re traveling. It’s hard going through the snow, and they’re starving. When they finally reach the Nez Perce, the whole Corps comes down terribly sick from eating too much right away, and they begin to build themselves canoes to make their way downriver again. And when they do, they pass through country full of friendly Indians and fish by the ton. The captains come up with the brilliant plan to split up, so the men who can’t swim will carry the fragile scientific instruments, and then men who can swim will take the canoes through the rapids and down the falls. “That’s me, among others,” Gus writes, “I wish it weren’t. I look down into this swelling, boiling water and I think I’m going to wind up looking like one of those bashed-up salmon. Even the Indians can’t believe we’re going to try this. There are more than a hundred of them along the banks just watching for these stupid white men to go down the river. This might be the funniest thing they’ve seen in years.” Followed by “I’m alive. Just barely….More falls to come. Still time to die.”

They live, amazingly, and just shortly after that they spot the ocean. 4,124 miles and uncounted dangers later, they’ve finally made it. The weather is dreadful, and their food is spoiled and everyone is sick and miserable, but they’ve made it, and they make their way to a winter camp to prepare to come back.

In the epilogue, Gus and everyone else return safely to the East, but Gus continues to work as a guide for years. He looks after Sacajawea’s children after her death, and marries a music teacher. I…think some of the other epilogues are a bit better.

Rating: B+. I enjoyed this, even though in all honesty it’s not actually one of most thrilling books out there. It’s more or less just a recounting of the trip set in teenage-boy terms, which isn’t a bad thing, but it’s a little shy on things like character development and conflict. I mean, I guess the main conflict is the group’s ongoing fight with nature, but still. At any rate—it’s interesting, it’s fun to read, it’s well-written and engaging, and honestly I ask for very little else out of these books.