I was somewhat disappointed in this one—I’ve so enjoyed most of the My Story books I’ve read so far, but this one left me cold. Which is too bad, considering that “novels about the Plague” is usually a genre I really like! Is that a weird thing to say? I don’t know, I enjoyed Year of Wonders and The Doomsday Book so very much that they’ve ruined me for anything else. 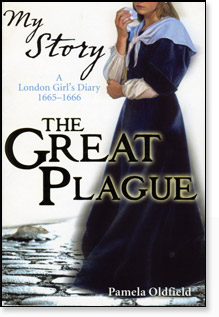 So I don’t start out sounding like I completely hated it, there were some very nice aspects to this book! Alice, our heroine, is a reasonably well-off girl living with her aunt and father in London, along with her little dog and their maidservant. Alice does grow up and mature during the book—kicking and screaming all the way, which is pretty darn realistic. Oldfield isn’t tempted to make Alice more mature or brave than she needs to be, and it doesn’t come across as false or over-done.

The problem, of course, is that stories about the plague are very, very well-trodden territory, and generally follow a very predictable pattern: rumours about a dangerous disease fly, some people flee to the country but most scoff and hope it’s nothing, before long people are getting sick and dying in the streets, and then it’s too late and the plague has overtaken the city. Unsurprisingly, this is exactly what happens here—rumours are flying that the plague has come to the city, and Alice’s father wants to send her to their family in the country, thinking she’ll be safer there. But she doesn’t want to go be with her cousins, whom she doesn’t like, so they just all stay in the city and worry and go on with their normal lives—going on excursions and going to church and having singing lessons and so on.

By far the most amusing part of this not-all-that-hilarious book is the ongoing dichotomy between the actual problems of the city (the plague, the stress about the potential war with the Dutch, that kind of thing) and Alice’s constant whining about how awful her family is and how they don’t understand her or let her do anything, and how miserable she is. Which is realistic! But there’s only so much whining I can take.  Also enjoyable is the number of details Oldfield has crammed in here about the rumours surrounding the whys and wherefores of the plague—people saying that the plague is caused by earthquakes sending pestilence around, saying that a walnut shell filled with mercury will ward it off, that kind of thing. It’s nice to see new stuff other than the tired old business about posies and the doctors’ bird costumes (although both of those things do make minor appearances).

In June there’s a terrible event, where Alice sees a young woman who is accosted by a plague victim in the street. This woman, Mrs. Gratton, is petrified even after Alice and her aunt Nell try to help her, since the man kissed her after stumbling around and then claimed she would die of the plague, too, but there’s no helping her worry. By the beginning of July, between this and the numbers of people who are dying, Alice’s father is determined to send her out of the country, but they can’t find a cart to be had anywhere, and then it’s too late because Aunt Nell becomes ill with the plague.

Maggie gets word that her mother is sick with the plague as well, and she leaves immediately, leaving Alice and her father alone to care for Nell. But Alice’s father goes to work, and the doctor comes and closes up the house for quarantine, leaving him locked out and Alice alone to look after her increasingly-sick aunt. Nell gets sicker and sicker and delirious, doesn’t recognize her niece, the buboes appear, it’s just a bad scene all around. The doctor sends a nurse to help Alice lance the bubo after applying hot poultices, but the woman is so slovenly and awful and hurts Nell so much that she lurches out of her bed and falls down the stairs, and Alice is left alone to drag her back up to bed, still terribly ill. She dies shortly thereafter, and Alice has no choice but to send her out on the dead cart with the others from her street. She’s wracked with guilt and confined to her home for the forty-day quarantine, and worried because she hasn’t heard anything from her father, either. She’s reliant on the watchman to buy food for her, and he isn’t around half the time, so not only is she grieving and fretting, she’s also hungry and lonesome.

She hears that her father is also sick with the plague in a pest-house, but also receives the good news that the doctor will give her a clean bill of health when her quarantine is over so she can leave the city for the country. When she’s finally freed from her home, she tries to find her father with no luck, and then waits for hours and hours in line to get her certificate of health. So she fumigates the house and heads off for the country after buying a very old, very lazy horse—only to find after days and days of travel that the road into Woolwich has been barred and is guarded by men fearful of allowing contagious city-dwellers into their village. They send Alice away, much to her dismay, and she writes a note to her uncle begging him to come and fetch her.

So she sets back home for London, terribly upset, having lost her beloved dog and her elderly horse and still with no knowledge of her father or the rest of her family. She just goes home, not knowing what else to do. By the beginning of September, after she’s been home a few days, her father comes home very wan but recovered, and Alice has to tell him about her aunt’s death and her useless trip to Woolwich. Maggie returns, having lost her mother but no one else in her family, and looks after them while Alice is very sick herself—not with plague, but just exhaustion. But her little dog comes back to her, having been having doggy adventures somewhere, and Alice goes to the country for a few weeks to continue recuperating now that her father has gotten in touch with her uncle to couch for her.

And then there’s a long break—from December of 1665 to August of 1666, which is explained by Alice having met a young man who she’s totally besotted with. Her father approves, and it seems like things are going perfectly smoothly when London begins to see fires breaking out all over. Then the Great Fire begins—the terrible fire made famous by Pepys, but I think it suffers here for being crammed in at the end of a book with plenty of other horrors. The fire doesn’t directly threaten Alice’s home, so instead she and her father go out to watch the fires burn down some of London’s famous landmarks. But her young man, Edward, brings word that the fires have eventually burned out, and asks her father for a formal betrothal as well—so there’s a happy ending after all.

Rating: C-. Or is there? I don’t know. I just have no strong feelings about this book—it’s competent, it’s not boring, it’s just very bland. I think, as I said, because it’s such a well-told story, a plague novel has to have something really extraordinary about it to be gripping—phenomenal writing, or a new twist on the plot, or just something. This one has nothing. It’s not a bad book, and it would probably serve just fine as an introduction to the topic for youth under the age of about twelve, but other than that it doesn’t have a lot to recommend for it.