One of my most absolute favourite things ever is when I get to discover new books that I missed as a kid! Granted, this one is because I did not grow up a child in the UK, but you know, details. 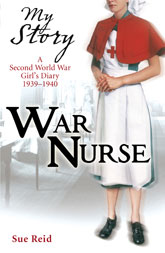 I totally adored this book. It’s sweet and heart-wrenching, and I think oddly enough that spunky is the word I’d put to it. It totally personifies that can-do, chin-up spirit that is so thoroughly and irrevocably associated with the Brits of the Second World War, and it’s blended so beautifully with sadness that it feels very real. It’s a book about an older girl targeted at younger girls, which can be a pretty tricky task, but it’s done fairly well here!

Kitty, whose friends and family call her Kitten, is a member of the VAD—Voluntary Aid Detachment, or a sort of emergency nursing corps who have been instructed to turn up as soon as war is declared. And we waste no time getting there on the very first page! Her brother Peter is joining up with the army, and she’s off to the military hospital at Standhaven, and while she thinks she ought to feel noble and brave, she’s mostly just scared and homesick and lonely without her best friend. Her roommate introduces herself only as “Nurse Mason,” and seems to be very tidy and serious—unlike the other girls who Kit went to nursing school with, who are all jolly and friendly and excited. Ugh, you just know it’s going to be tragic and sad, isn’t it? Of course it is, no WWII stories end well.

The nursing sisters—the real, trained nurses who are the VADs’ bosses—are very strict, and very particular. Because the VADs aren’t trained nurses, most of what they do is scut work—cleaning (all the time), changing bedsheets, distributing food and juice to patients, that sort of thing. The patients are all cheeky and friendly, but nothing helps the absolute exhaustion! Poor Kitty and the other VADs are treated like children who know nothing which in fairness they kind of are. For all of their scrubbing and hard work, they earn a pound a week.

And it is hard work—they scrub the ward for special infections, they have air-raid drills, they have all their regular work and Kitty still isn’t getting along with her strange, quiet roommate. She feels terribly inferior to her, like she can’t do anything right, and is really struggling when she gets a letter from her best friend, Anne. Anne asks if she’s heard from Giles—Kitty’s sort-of boyfriend! He’s a pilot (oh no), but she hasn’t heard from him and she’s beginning to wonder if he’s forgotten about her. She does eventually get a letter from him, but she doesn’t know how to respond.

Nurse Mason is the first VAD promoted to actual nursing duties like taking the patients’ vitals, which makes all the others very jealous—including Kitty, even though she tries to hide it. The nurses are all invited to a dance and have a lovely time, but it does make Kitty worry about her brother, who will be heading to France soon. She frets about him and Giles and all the patients—including the one she was fond of who got transferred to a specialist hospital. It’s very well written—on the one hand there’s the drudgery of boring work, and on the other hand there’s the excitement and thrill of it all, and underneath it all there’s a terrible fear that really shines through starting about a quarter of the way into the book and just builds and builds and builds.

By November, the girls are fairly well settled in their jobs when Mason asks for a transfer to the surgical ward—and gets it. Kitty can see that her side of their room is full of anatomical manuals and medical textbooks, and finds out that Jean always wanted to be a doctor, not a nurse, but her father died and she wasn’t able to afford medical school, which is why she’s struggling along as a VAD to earn some money. Poor girl. Kitty eventually coaxes her to come along to a party the nurses are throwing for the officers (oh, the 40s were a different time), and she actually enjoys herself for once!

Kitty goes on night shifts and gets promoted to doing more nursing work, but all the time she’s worrying about her brother and Giles, while not writing him because frankly he’s a little boring for her. None of them are able to go home for Christmas, so they have a little party on their ward instead. Giles surprises her by coming for a visit, which turns very awkward because it turns out that neither of them are sure about how they feel about the other. Kitty is miserable, Giles may be boring but he’s also for sure miserable, and it makes you feel very, very bad for all of them.

There’s an outbreak of influenza in January, but in February Kitty is promoted to surgery with Jean thanks to her continued improvement. Then, suddenly, the hospital is crammed full of dreadfully wounded soldiers who are so badly wounded that they can’t even be operated on until they’re out of shock. The hospital for the past few months has been relatively quiet and safe—as safe as it can be—with just the occasional wound, but now they’re in the midst of war, more or less.

Things are very busy for Kitty now that she’s in surgery, and she thinks she isn’t strong enough to continually put up with the blood and the gore. But she is—and the matron is actually impressed with her! A German pilot crashed near the hospital and is treated there—and the men don’t automatically hate him, either. They think he’s just doing his part like they are. But then in May, if you know your history, you know that Germany begins to roll through the Low Countries and head for France. Kitty’s brother is in the Expeditionary Force, and she can barely work for worrying about him and Giles, who has qualified as a pilot.

Then we jump right into the end of May, when the hospital is crammed full of terribly wounded and dying men. All of the nurses are all hands on deck, men are dying in the hallways, and more ambulances are arriving every hour. This is the evacuation of Dunkirk, of course, and in addition to the loads and loads of wounded men, the country is reeling from the blow. Kitty learns that Jean’s brother is also overseas, and they worry together that the next ambulance to come in will be one of their brothers.

Some of the soldiers who come in are suffering dreadfully from shame and grief at being so badly beaten and forced to evacuate—it’s even worse than the physical trauma. They’re bitterly angry at the RAF for abandoning them—or they feel like they’ve been abandoned—in their time of need. Peter manages to get home just before France surrenders, and Kitty is ecstatic that he’s okay but crushed that Europe is defeated and the Germans are so close now.

In July, Kitty’s hometown is bombed. Her family is OK, but now they’re really in the danger zone. In August she learns that Giles has been killed after being shot down over the Channel. Kitty feels terrible—not particularly for her relationship, exactly, but full of guilt for not really caring about him the way he wanted.

In August, the hospital is hit and Kitty goes from nurse to patient. One of the patient’s beds catches on fire and Kitty beats it out, burning her hands and arms very badly. Matron tells her how proud she is and how Kitty saved several lives, but all Kitty wants to do is get back to work instead of feeling like she’s shirking in her sickbed. She’s sent home to finish convalescing once she’s well enough to get out of bed, and Matron offers to write her a letter of recommendation to become a certified nurse.

Rating: B+. God, I really enjoyed this book. It’s well done and very sad, but it’s not an unending litany of miseries. There’s a nice balance of the good times Kitty has with her fellow nurses, and the worry over her brother and the other men, and how much she’s learning, and the destruction and terror of the whole war. It’s not a terribly long book, but it’s pretty effective at that. You get such a good sense of Kitty as a person. What’s keeping this book from an A-rating is the shortness of the book, and the fact that it probably could have been more effective if it was targeted at a slightly older age range. It’s always tricky to write a book for one age group about a different one, and I feel like the whole subplot about Kitty’s not-really-a-boyfriend-boyfriend Giles could have been handled more effectively with a tiny bit less discretion. These are all pretty minor gripes, though, and it shouldn’t take away from what’s a really good, sad read.