Would you believe this is the first time I’m reading this? For some reason I missed this as a kid, which seems like an outrageous oversight. I can’t explain it. 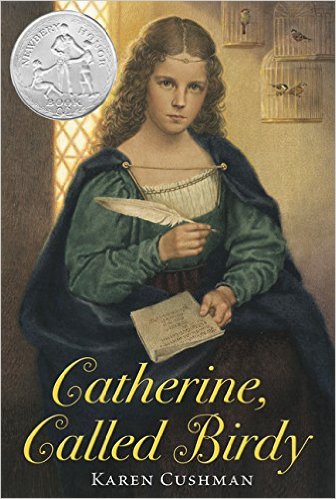 How did no one buy me this book as a kid? It was a Newbery Honor book and it would have been right up my alley! But instead here I am with the 20th anniversary edition, enjoying it as an adult and totally unable to share what I thought of it as a kid. Such is life. Anyway, Karen Cushman wrote the excellent The Midwife’s Apprentice and has an excellent reputation for children’s historical fiction, so I am practically preprogrammed to enjoy this.

This is a journal-style book, except it has the charming detail of including which saint’s feast day every day is, and some expository detail. “28th Day of January, Feast of Saint John the Sage, an Irish philosopher who was stabbed to death by his students.” “3rd Day of November, Feast of Saint Rumwald, who at three days old said ‘I am a Christian’ and died.” This is also pretty much the Ur-Example of “girl who doesn’t want to submit to society’s expectations about her,” which is the most common trope in all the books I review, but it’s done reasonably well here so I won’t complain about it too much. Other than right here.

So the idea and driving force behind this whole book is that Catherine (called Birdy, because of her attraction to birds) is fast approaching the age where she’ll need to be married off, and she does not want to be at all. Her father is a rough and cruel lackwit, but he’s doing his best to get Catherine married off to a wealthy man as quickly as possible. Catherine’s job is basically to try to outwit him at every pass. She does a surprisingly good job for a young teenager, which either speaks to her wit or her father’s lack. The first suitor comes calling and Catherine manages to dispatch him by blacking out some teeth with soot and behaving like an idiot at dinner. Mission accomplished.

Catherine lives in the manor of the estate, but her best friend is Perkin, the goat boy in the village. Her other best friend, Aelis, lives on a nearby manor, so Catherine is fairly isolated most of the time. She has three elder brothers—Robert and Thomas, who are knights to the king, and Edward, who’s a monk. Her uncle George comes for a visit home from the Crusades, and brings them all amazing stories and gifts from the Holy Land. But then, tragedy—Aelis comes to visit and falls in love with George, sending Catherine into the depths of despair. She tries to use magic spells to tear them apart, but succeeds in nothing other than making them confused and dirty.

Eventually George sinks deeper and deeper into despair himself and leaves for York just before Christmas. They’re all well distracted by the Christmas revels, and afterwards George comes back just to tell them all that Aelis has been married off to a seven-year-old duke and has gone to the king’s court. He has married a Saxon widow, so they’re all unhappy together, and Catherine wonders if it wasn’t the wrong thing to do to try and break them up in the first place.

When a baron’s son comes to see if Catherine will make him a good wife, she’s so unimpressed she sets fire to the privy while he’s in it, which effectively takes care of that. She goes for a visit to Aelis, or the duchess of Warrington as she is now known, and it’s immediately obvious that she’s much wealthier than Catherine’s family could ever be. Catherine is so wracked with guilt she can’t really enjoy her visit all that much, but they do have a visit from one of the king’s cousins who is passing by. Unfortunately she turns out to be ancient and does nothing other than tell fortunes, but hey, you take what you can get.

Catherine is called home when her brother Robert is marrying the young heiress to a nearby estate, where one of the guests is a shaggy-bearded monster from the north, near where her mother is from. Shaggy Beard has a son near Catherine’s age, and from the way he talks, she begins to think they’re plotting a match. But she is soon distracted by a new boy who comes to be fostered at her father’s estate (from a nearby noble family—essentially a way to send your annoying teenagers away for the worst of their behaviour and have them learn some manners)—Geoffrey. She is so taken with the “beautiful as an angel” Geoffrey that everything else quite leaves her. Until they get a message from Shaggy Beard saying that he wants to marry Catherine himself! They’re betrothed in haste, and Catherine thinks of all the way she can try to escape.

She mopes around and cries a bit and tries to think of other things she can do besides get married. Of which there are none, because medieval England was not known for its social mobility or multiplicity of trades open to unmarried teenage girls. “Mayhap I could be a hermit. I wonder what they do.” Her crush on Geoffrey dies off when she spies him mocking Perkin for having a limp, and that’s the end of that. “Corpus bones. I utterly loathe my life.”

Here’s an interesting comparison for you: In a lot of ways, this feels like a precursor to Louise Rennison’s Georgia Nicolson books. Hear me out! Now, they’re obviously vastly different in ways I can’t even begin to count, but they have some similarities: they’re both girls in England around fourteen, who are preoccupied with boys and unclear about what their futures hold, and sway back and forth frequently between delight and utter despair at the horror of their lives. Clearly, Catherine’s future is a much more pressing matter than Georgia’s, but I really think both do a terrific job of showing how horrible and joyful it is to be a teenage girl. There’s a lot of things than transcend the age and societies we live in, and I love the way it’s shown here.

“I noted as I climbed into my bed last night that Wat was trimming the rushlights. This morning…a new fire was brightly crackling. It occurred to me that Wat had worked through much of the night and it also occurred to me that it had never before occurred to me. When does Wat enjoy the warmth of his bed?” I also very much enjoyed this—it’s the only point at the book where it’s noted, and it never goes further than this, and Catherine even notes how she’s never thought about it before. This is certainly no “modern social sensibilities transported in the 13th century” story, not one bit. I like that it’s just an aside and goes nowhere! It feels far more realistic that way to me.

By Easter Catherine’s father is in talks for her marriage negotiations, and George comes back to visit with his new wife, Ethelfritha, who is moderately insane but would be fairly lovable if Catherine wasn’t wracked with guilt over her marriage to George. Catherine’s mother only asks that Catherine not be married until her baby is born in the fall, so Catherine has a few months to figure it out and hopes her mother won’t lose this baby, too. She fights and fights and fights with her father, to no avail, but her mother comes down with an illness and distracts both of them.

Robert’s wife dies in childbirth in June, and Catherine’s father comes down with a terrible toothache and must go to the nearby town to have it pulled. Catherine can’t enjoy the trip, or the midsummer festivities, or anything else as she’s so dreading her upcoming marriage. It gets hotter and hotter and Catherine grows more and more discontented, and then her mother comes down with another fever, meaning Catherine must go to the Bartlemas Fair without her. While she’s there she sees a dancing bear, and is so horrified by its treatment that she wants to buy it. The only way she’ll have enough money is to use the silver Shaggy Beard sent as a betrothal gift, but she knows that using it will means she’s consented to the marriage. But she feels so awful that she does it anyway.

Shaggy Beard sends a message that he will be there before the end of September and they’ll be wed. But before he arrives, Catherine’s mother goes into labour and labours for days, and they’re afraid she’ll die. But she gives birth to a girl and then comes down with childbed fever, and is so deathly ill that she very nearly does die—but makes it at the last minute. Then Aelis announces that she and Robert will be married now that her child duke husband is dead, and she’ll be Catherine’s sister—but Catherine will be in the north, married to a shaggy monster.

Catherine’s last desperate plan is to seek out her aunt Ethelfritha, who is just crazy enough to help her, so she walks all that way to their estate. But all her crazy plans and schemes are for nothing, and she realizes that the only thing she can do is to remain who she is wherever she is. She goes home, only to find that Shaggy Beard’s messengers have arrived with a drastic message: he’s dead and Catherine will marry his son Stephen after all!

“For me it is like moving from the darkness into the light, like coming in from a gray mist and seeing the fire make a warm and golden glow in the canter of the hall, like the yolk of a boiled egg or the deeper gold in the belly of a rose.” Marrying someone she’s never met is such a happy accident that she’s thrilled to death, rather than marry the monster she thought she would have to.

Rating: A. Well, what other rating could I give it? Catherine is funny and charming and real and sincere and realistic for the time period. The story is interesting and doesn’t ever come across as too modern, and it’s jam-packed with enjoyable details and funny side stories and real sadness and confusion and pain. I love this as a story about a teenage girl more than I like it as a historical fiction novel, which of course it is, but it’s both things! And it does both things beautifully well, I think. On the one hand I wish I had read it years ago as a kid—on the other hand I don’t think I would have appreciated it quite as much as I did, waiting until now. Either way, it was wonderful.