We’re back in with the absolute classics! 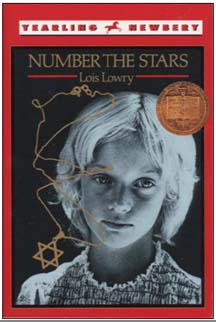 I understand they’re reissued this with a blue/gray cover, but this is the cover I grew up with and was on every school library bookshelf. I feel like the red and black is a particularly scary, and by scary I mean good, choice. This is a Newbery Medal winner, and an all-around wonder of a book, but I think the real beauty of this book is that it’s much, much scarier to adults than it is to kids. When I first read this book, I was probably around nine or ten, which is the age of Annemarie, the protagonist, and while I enjoyed it, I think I missed a lot of the subtler scariness. But now I’m nearly thirty and reading it is far, far worse, and it makes me want to cry.

Annemarie lives in Copenhagen with her parents and her younger sister, Kirsti. Since Copenhagen is under occupation by the Nazis, things are somewhat strained to say the least, but most of this goes over Annemarie’s head other than the soldiers on every street corner. Annemarie’s best friend, Ellen, is Jewish, and presumably a bit more worried about the state of affairs, but they still go to school and run races and generally behave like children. Annemarie used to have an older sister as well—Lise—who was engaged to be married when she was killed in a car accident two years before. Ever since, Lise’s fiancé Peter comes around to visit, but Annemarie notes how much older he seems ever since then.

Gradually the Nazis begin to force the Jews out of work and out of their businesses, like the woman who owns the button shop near the Johansen’s apartment. Annemarie’s parents try to tell her very gently that these are their neighbours and friends, and it is their duty as friends to take care of their Jewish neighbours when they have to “go away.” Just before the Jewish New Year that year, Annemarie’s parents tell her that the Rosens have been “called away to visit some relatives” very suddenly, and Ellen has come to stay with them for a couple of nights. But they haven’t, of course—the Nazis are trying to “relocate” the Jews, and Peter has taken Ellen’s parents to a safe house, but couldn’t take all three of them. So Mr. Johansen tells the girls they will be sisters in the meantime—“Don’t be frightened,” he said to them softly. “Once I had three daughters. Tonight I am proud to have three daughters again.”

So one of the biggest “adult fears” in this book that completely blew past me as a kid was how absolutely petrifying this must be for all the parents involved. The Rosens are trusting their friends with their daughter—their only precious daughter—and trusting that she’ll be safe when they’re going God knows where. And the Johansens are taking on the extremely dangerous task of hiding a Jewish girl, when they know full well if they’re found out they will all be punished. I can’t imagine the level of trust you’d have to have, or what it would have to be like to send your kid away and hope everything would work out.

Anyway, that night the Nazis do come to search the apartment, knowing that the Johansens and Rosens are friends and the Rosens have disappeared. Annemarie breaks Ellen’s Star of David necklace jerking it off her neck (this is the scene I remember the most vividly), and Mr. Johansen tells the Nazis Ellen is his daughter Lise—ripping out her photo from the baby book where Lise had dark hair, and being sure they won’t be able to see the birth date.

Obviously after that it isn’t safe for Ellen to stay there, so Mrs. Johansen takes all three girls to “visit” her brother Henrik, who lives on the coast. Henrik is a fisherman who lives in an old home all alone, and the girls are free to run around and play and enjoy the October weather and cream from his cow. Henrik tells them that there has been a death—Great-aunt Birte has died after a very long life, and they will be sitting up with the casket in the living room all night. Annemarie has never heard of such an aunt, and she knows all the extended family, and she knows darn well there’s no Birte anywhere.

When she asks Henrik about it, she says that she’s not very brave—but Henrik tells her that she will be, when she has to be, but “it is much easier to be brave if you do not know everything. And so your mama does not know everything. Neither do I. We know only what we need to know.” He tells her that there’s no Birte, of course, but they will be having a wake with the casket—and some strangers come over that night, two adults with a baby and an elderly man, to stay the night. Peter comes from Copenhagen, too, adding to Annemarie’s confusion. And he brings the Rosens—to Ellen’s delight and Annemarie’s confusion.

The Nazis notice all the activity at the farmhouse, of course, and come to ask what’s up. Mrs. Johansen explains there was a death and they’re sitting up, and the officer asks why the casket is closed, and she does a wonderful bit of “Of course I’ll do the thing you want me to do! It was only typhus! Let’s do it!” and the Nazi freaks out a little bit and slaps her. The Nazis leave, and Annemarie tries really, really hard to be brave for Ellen and her family.

The casket is full of clothing, which they give to the Rosens and strangers—and Peter drugs the tiny newborn baby one of the women is holding so she won’t cry. He gives Mr. Rosen a packet to deliver, and gives them all instructions on how to travel down the path to the boat. Because they’re taking them to Sweden in the bottom of Henrik’s fishing boat, of course—in the false bottom he built expressly to smuggle Jews to Sweden along with most of the other fishermen in Denmark. Mrs. Johansen takes Ellen and the Rosens, and leaves Annemarie to wait for them at home.

She waits and waits and waits and eventually falls asleep. Very early in the morning she’s frightened to see that her mother isn’t anywhere to be found—until she goes outside and sees her lying on the ground. She had fallen on the path and broken her ankle coming back from the fishing boat, and they think that everything is fine until they see that Mr. Rosen dropped the packet that Peter gave him. Mrs. Johansen can’t go anywhere, so she sends Annemarie with a basket of lunch covering the packet (a handkerchief wrapped in paper) and tells her “Go. Go right now. And run! As fast as you can!”

All that running from the beginning of the book pays off when Annemarie gets almost all the way there and then is stopped by a couple of Nazis, who ask where she’s off to in such a hurry. She takes a leaf from her little sister’s book and pretends to be an empty-headed ditz, but the Nazis go through the whole basket and feed the bread to their dogs, and they find the handkerchief at the bottom after all. The dogs sniff at it, then wander away, and Annemarie takes it all to Henrik at the boat, who’s beyond relieved to get it.

If you’re like me and didn’t read the author’s note at the end of the book as a kid (because why would I do that?), you probably didn’t catch the explanation about the Mysterious Handkerchief. It’s a drug composed of rabbit blood mixed with cocaine, that they would apply to handkerchiefs and then use when Nazi dogs were nearby—the rabbit blood attracted their sense of smell, and then the cocaine numbed it and made it impossible for them to smell anything around, like, say, the hidden people.

Henrik gets away to Sweden, even after the Nazis come to have a look around his boat, and the refugees get there safely as well.

In the last chapter, the war ends and the Johansens make the Rosens’ apartment ready for them to come back to it as they have been doing the past two years. Peter is dead, after being captured and executed for his part in the Danish Resistance, and when they learn that Annemarie’s parents tell her that Lise was a member of the Resistance as well. She was in a car accident—but she was deliberately run down by Nazis escaping from one of their meetings. And Annemarie finds Ellen’s necklace from its hiding place and gets it fixed so she can give it back to Ellen when she comes home.

Rating: A. Well, what other review could I give this? This is a wonderful book and beautifully written, but it never goes overboard. The writing itself isn’t ever flowery and doesn’t ever venture into the world of military-esque language about honour and strength and all that. As I’ve mentioned, this book is infinitely more frightening for an adult with a full complement of knowledge about the war than it is for a kid—as a kid, it’s mostly a slightly-scary story about two girls who are friends, one of whom has to go away, and the other one who has a lot of questions and a scary encounter with some Nazis. That doesn’t lessen its impact at all, I hasten to add—but it does make it a very different book. Gosh, I encourage people to re-read this book as an adult for a totally different experience. Lots of the books that I read are good, but relatively shallow—interesting but largely the same no matter who is reading them. This one is immensely complex but definitely doesn’t appear that way on first glance, and it’s a hugely different experience depending on the reader. Go read it.

6 thoughts on “Number The Stars”