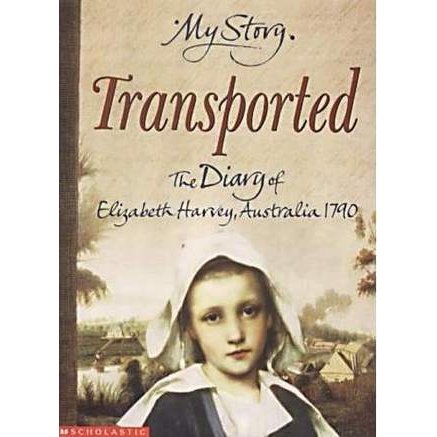 Elizabeth, our protagonist, is a convict girl in Rose Hill, which I think is an interesting choice. She begins her journal by trading two cabbages to a Royal Marine for it—he wants them for his ailing younger sister, and Lizzie wants something to write in because she misses her family so much. She works for her master, Dodd, with Sarah—her protector and surrogate mother ever since they were in prison together. Lizzie was unfairly convicted of theft of “a linen gown and a straw bonnet worth seven shillings,” which is a nice way of showing that many of the convicts really were sent to Australia for incredibly paltry crimes. But this bartering is dangerous, since food is so incredibly scarce that poor Lizzie could be flogged for giving any of it away.

The whole settlement is in bad shape. They’re all starving and incapable of working, and the land near Botany Bay is barely worth farming on anyhow. The convicts harass one another and everyone is afraid of the natives and the wildlife and it’s generally a Real Bad Time. Everyone is sick with malnutrition and all the other random illnesses that come along with it, everyone is miserable, and they’ve been in Australia more than two years already!

In April, Lizzie rescues a little girl from one of the convicts they call Simple Sam, who’s lost his mind from prison and beatings. (Of course.) She takes the little girl home, and it’s clear she’s in ill health, and it turns out that she’s the ill younger sister of the Marine, and the daughter of the surgeon (doctor, North Americans) James Russell, who is so impressed with Lizzie’s ability to read and write that he asks Dodd for her to care full-time for the little girl—Emily—and teach her to read and write. So off she goes down to the Russell’s hut, after a tearful parting from Sarah, and the Surgeon springs the news on her that Emily is in fact very ill and could die at any minute from overexertion. What a fun job this is turning out to be. Because five-year-olds are so easy to keep quiet at all times.

So Lizzie is incredibly busy with household chores on top of trying to keep a five-year-old relatively calm, and teach her some letters besides. Winston, the teenage marine, notes that Lizzie doesn’t sound like your typical Londoner, and she tells them she grew up in the countryside with her parents and younger brother Edward, but went to London to be placed as a milliner’s assistant at nine after her parents died of influenza. God, this is depressing. She was nine! Anyway, Lizzie spends her time teaching Emily and trying to keep her from getting too exhausted, and they go on little excursions to visit Sarah up the street and all the while, they’re all starving. I feel incredibly guilty for doing this recap while eating Oreos and drinking tea. Lizzie tells them all stories about London and how cruel her mistress was at night, and during the day they all pray that the Second Fleet will show up and bring some food. Guys, I cannot stress this enough: THEY’RE ALL STARVING. Very, very, very slowly (she typed, while eating a cookie).

Emily comes down with a fever thanks to eating the rotten salt meat, and then the Surgeon comes home with the news that they’ll be moving back the twenty kilometers to Sydney Cove so he can help to nurse the sick there. Oh, goodie, nothing bad ever happens when you move a sickly child. Lizzie tells the Russells how she was unfairly accused of theft when the other apprentice and manservant had conspired between them to steal a number of things from her mistress—and then the mistress found Lizzie’s little stash of money from her parents, thought it was her, and hauled her off to jail. While the other two left and opened up a tavern. Monsters. She was nine!!! In court, her mistress just lied through her teeth, and Lizzie correctly points out that who would the justices believe, a responsible adult milliner, or a nine-year-old accused of theft. Case closed, off to prison with you, child—and that’s where Sarah finds her and adopts her as a little ward, and takes care of her.

All this time, Lizzie notes that the Surgeon is remarkably thoughtful and kind to her. They’re off to Sydney in mid-May (with many warnings and precautions from Sarah), and the Surgeon warns them there’s even less food in Sydney. Glorious. It takes them a few days to get there on account of the slow travel (starvation) and Emily’s weakness. On the way they run into a Lieutenant, who tells them it’s just as bad as they’ve heard in Sydney and everyone is starving. Once the Russells and Lizzie arrive there, they have a much nicer hut, but….still no food in it. They watch out in the harbour for sails, and walk around the settlement, and Emily learns more reading, but….what else can they do? Nothing, and all the convicts and soldiers are equally out of sorts, so everyone is quarrelling with everyone else all the time and fighting and gambling and trying to steal everything from everyone. There is not one speck of light in this whole book.

A little girl disappears in Sydney, and all the suspicion falls on Sam, the convict who lost his mind. Lizzie pleads and pleads with Winston to stand up for him—claiming he’s totally harmless and just unable to control his speech—and Winston actually does it, and manages to hold off a whole mob intent on hanging him without a trial. The Surgeon has no patience for Sam, and Winston tells Lizzie why—because back in Cornwall, when Winston was just ten, “the village idiot stole a child. This child was later found murdered.” Her name was Lizzie, too, and she was Winston’s elder sister and the Surgeon’s beloved firstborn. This poor family—daughter murdered, wife dead from illness, youngest daughter an invalid, and now they’re all trapped in Australia, slowly starving to death. Some people have triple their troubles in this world. I know these are fictional people, but…it’s so sad!

Emily becomes sick again—very sick this time, near the end of May. Lizzie and the Surgeon between them stay up all hours trying to at least get her to take some water or broth. But she gets worse and worse, her breathing is increasingly laboured, and then at the very end of May, she dies. This is the most depressing book. Lizzie is crushed, but of course she’s not nearly as devastated as the Surgeon and Winston—who now have lost all the women in their family. Poor family.

The first of June, they officially have no food. None. Zero. Emily goes off to gather shellfish, and gets caught in the oyster beds and nearly dies falling off a cliff. “Another moment and I would fall. Another moment and I would be dead. And perhaps this would not be so bad. Then I would no longer have to live with hunger and despair as my constant companions…” She’s thirteen. Oh my god. She makes it home, but just barely, and the Surgeon manages to bring home some vegetables anyway.

And then he springs a surprise—he and Winston have been approved to return to England on the very first ship. And the Surgeon tells her that as much as he loves her—“as dearly as if you were part of our family”—there’s nothing anyone can do to reduce her sentence. So Lizzie will be sent back to Dodd to be with Sarah, and she gives her journal to Winston to take back with him and send to her younger brother, Edward, so he will know what happened to her. And then, just as it happens, the Second Fleet arrives in the harbour—“Now we are saved…”

There’s no epilogue in these books, only a note that there was a real girl named Elizabeth Hayward who really was the youngest female convict in the First Fleet. The real Elizabeth was transported to Norfolk Island and left in 1813, having borne four children to a husband by the name of Joseph Lowe.

Rating: B. This book was SO DEPRESSING. Not in a bad way—I learned a lot, it was educational, and so on—but the writing wasn’t as top-notch as some of the other diaries I’ve read (and loved). I’m dying to read some of the others in the My Australian Story series to see if they all tend more towards the educational side rather than the rollicking-narrative side, but ultimately it was interesting enough to keep my interest. But again—I don’t know very much about Australia! Maybe it wouldn’t be as interesting to kids who grew up learning the story in school? I have no idea! At any rate, the story was engaging enough to distract me from the rather heavy hand it was written with (yes, they were starving, starving, we get it) and I’d recommend it to other dolts about Australian history, like myself.