Fine. I’ll review this, but I won’t like it, and I’ll complain about it the entire time, because apparently What A Waste Of Potential is my biggest problem. Too bad I am not a teacher and can’t torture children by going on at length about their wasted potential, like I can with this book! 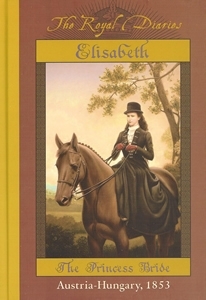 First of all, the illustration on this cover is awful. Elisabeth, or Sisi, really was a famously beautiful woman, and the existing photographs of her show this! Why is the painting of her on the cover making her look like a disgruntled schoolteacher who resembles her own horse? Especially since practically this entire book and almost all of Sisi’s social capital rested on how beautiful she was! Seriously!

Second of all: This book is impossibly short! It clocks in at just ninety pages of story! You can’t tell me that Laurence Yep got approval to write an incredibly long story about Lady Xian, but Barry Denenberg got only ninety pages to blow through a story about a misunderstood monarch who is a bang-on perfect subject for a YA novel about royals? She literally has everything: incredibly difficult expectations placed on her without the framework to deal with them, a whirlwind mistake romance, anorexia and stress disorders, and the unreasonable expectations of beauty and femininity! This is tailor-made for a really good YA novel and THIS is not it. I should write it, I’d do a better job.

We open the book in July at Possenhofen, Sisi’s childhood home, where her older sister Helene is being summoned to Vienna by their aunt Sophie–the Archduchess of Austria and mother of Franz Joseph, the Austrian emperor. Now, Helene has long been picked out at Franz Joseph’s eventual bride, and their mother is dead-set on this, and her father doesn’t give a crap. I get a very strong Mr. Bennet vibe off of Sisi’s father–he doesn’t seem to care too much about his children’s futures, and is more concerned with dicking around at home. But as usual, we are expected to think that Sisi’s mother is awful and controlling for wanting to arrange her daughters well, and Sisi’s father is wonderful because he’s so indulgent. I already hate this book.

Sisi doesn’t want to go, either, because she would rather hang out at Possi with her dad and younger siblings, riding and swimming and playing. But her mother insists, mostly because Sisi has been picked out to marry Karl Ludwig, the emperor’s brother. People are bustling around getting Helene ready for the trip because everyone is assuming that on her return, she will be engaged to Franz Joseph and the next Empress. By mid-August they set off for Bad Ischl, and their journey is just one problem after another–especially since they arrive late and they are separated from their luggage, so they have to meet the Emperor wearing their dusty black traveling clothes.

At the reception, Helene is a disaster–worried, stiff, ill-at-ease, generally uncomfortable. She makes a terrible impression on Franz, who spends most of the evening staring at Sisi while she talks to Karl Ludwig. Sisi doesn’t want to smile, because she’s afraid of showing her yellow teeth, and she doesn’t want to eat, because she’s paranoid about getting “fat as a tub right before everyone’s astonished eyes.” Somehow this non-smiling non-eating girl is hypnotically fascinating to the emperor, though, because at the ball the following night he asks her to dance and presents her with a bouquet of flowers–“Mama has explained to me that it means he has chosen me to be his wife!”

So…the majority of the book so far has been taken up with reminiscing about how lovely it is in the country, and then BAM! What’s basically a marriage proposal. I hate everything about the pacing in this book. Sisi writes that the emperor found her “most attractive,” with magnificent hair, and he argued with his mother about her, since Sophie had picked out Helene as his wife. But it doesn’t matter, he’s the Emperor and gets to do what he pleases, more or less, and Sisi goes on about how she’s “overcome with happiness” and at the same time worried about disappointing her sister. “I am afraid we acted in a most insensitive manner, gazing the whole time into each others’ eyes, oblivious of Aunt Sophie and Nene and making no attempt to hide our mutual feelings.” Terrific. This is why teenagers shouldn’t get married (although Franz is twenty-three at this point, he is behaving like a teenager).

After Sisi’s father consents, the engagement is announced, and the deluge begins. People are shouting her name everywhere she goes, crowds are everywhere, the emperor keeps giving her expensive gifts, and so on. At the end of August they return to Possi and the emperor to Vienna, because all of this has happened in TWO WEEKS. No wonder it didn’t work out. At home, Helene refuses to talk to Sisi about it, and Sisi keeps receiving luxurious and expensive gifts, which I can’t imagine help matters any. Franz comes to visit in the middle of October, and they go riding and attend balls–but when he leaves after a week, “I am too despondent even to write in my diary.” TEENAGERS.

This book also did not pass even the most basic fact-checker, either, because on page 63 “Mama well knows I have absolutely no faculty for learning a foreign language,” which is odd because just ten pages earlier, Helene and Sisi are using “English, our secret language. No one else understands English so it has become our habit to speak it…” which is pretty damned good for someone with “no faculty for learning a foreign language.” On top of which: the real Sisi was fluent in English and French and learned Greek and Hungarian. I don’t even know why I’m complaining about this other than it irks me.

By November the wedding date has been set for April and trousseau-making has begun in earnest–and Sisi is again dismissive of her mother’s very real concerns that her trousseau will be too informal and an embarrassment to her family. Franz comes for a brief Christmas visit, and by the beginning of January the trousseau is complete. (Which covers two full pages, in list form, of detailing what is in it.) “I am so busy with all the preparations for the wedding I no longer even have time each day to record that day’s events in my diary,” she writes at the end of January. Oh, so that’s how this is going to play out and that’s how we’re going to do a time skip. Well, fine. We cover January and February in four pages, and then suddenly it’s mid-March and Franz arrives for a visit and to rebuke Sisi for treating her mother-in-law too informally.

Then we’re in April and they are heading for Vienna–for all Sisi’s complaints about how much she’ll miss her family, there’s no depth. It’s literally just her repeating over and over how much she’ll miss everyone. That’s the best she could do? Upon her arrival in Vienna, the whole city is plastered with her picture and everyone has royal-wedding-fever. Sisi writes about how many people she has to meet and how arduous it is, and how insanely formal everything seems to be in terms of royal protocol. “All I seem to do since I left Bavaria is meet people I don’t know, wave to crowds of screaming people, and go from one vehicle to the next in rapid succession.” Well, perhaps you should have considered that before leaping right to getting married to the god-damned Emperor of Austria, Sisi!

In the last entry we get the details of the wedding–the press of the crowds, the candles and the royals in the church, the sound of the bells, the droning of the Archbishop, and then it closes with Sisi waiting for “the Emperor’s knock” on her door.

I AM NOT KIDDING. That’s it! The whole book! It’s so short! And such a disappointment! There are so many vague hints–Sisi writes one two-line entry about Hungary and how it sounds like a nice place, foreshadowing the union of Austria-Hungary. One entry about how overbearing her mother-in-law is, which would prove to be the biggest stressor in her life, since Sophie ran the court and ruined Sisi’s life, more or less. (She took Sisi’s children away! And raised them herself! And named the first daughter Sophie, after herself! Without even consulting Sisi!) And the epilogue points out how they definitely did not live happily ever after, and points out how Sisi had what would today be called anorexia, but that’s it. (Also: “There are no photos of Sisi later in life.” In the SAME BOOK, THIRTY-NINE PAGES LATER (a good chunk of this book is “historical note” and photos), there’s a picture of Sisi just before her death by stabbing! I know what they’re going for is “posed portraits,” but COME ON. EDITING. USE IT.

There is just so much missed in this book. Expand this book by twice the size, which is certainly not uncommon for a Royal Diaries book and would not go amiss, and it could be great! (Probably not great, because this is a Barry Denenberg book and not terrifically written to begin with, but “could be,” we’ll go with that.) You could really go into some depth about the foreshadowing of Sisi’s battles with her mother-in-law, and her issues with anorexia and body image, and so on. It doesn’t even have to be graphic, post-wedding stuff–there is SO much more scope here, and most of it is wasted on two-line diary entries about “I’m going to miss everyone so much!” SHOW. DON’T TELL. (I feel like I may be shouting.)

Rating: D.  THIS COULD HAVE BEEN SO GOOD. And it wasn’t. It really, really wasn’t. I wouldn’t even bother recommending it when there are so many other very good Royal Diaries books to choose from. Please do not waste your time on this.

2 thoughts on “Elisabeth: The Princess Bride”