Does anyone else remember these books? If my cursory Googling is anything to go by, the answer is no. These were a cheap knockoff of the Dear America books, except the main differences were that the DA books were actually in diary format! What on earth is the point of a series called “American Diaries” if the entire book is a regular old book with a 3-page diary entry at the beginning and end? Cop-out! The other difference is that the DA novels dealt with issues with grace and humour and occasionally really excellent writing, while all these books…..do not. Anyway, my childhood library had scads of these books and for some reason I owned one, but I had no idea there were so many of them! There’s nineteen! They’re all by Kathleen Duey, whose work can be described as “workmanlike” at best and downright strange at worst! (She did write the outstandingly bizarre Louisiana Hurricane that I reviewed here.)

Fine, let’s see. This is a rare example of a book I haven’t reread since buying it, since most of my childhood books are splayed open, stained with crumbs, or otherwise bear conspicuous signs of love. This book could be new. It’s a first edition, which means I got it new in 1996 when it came out, and the price on the spine is $3.99. Wow, remember when new paperbacks cost only $4? That was great. 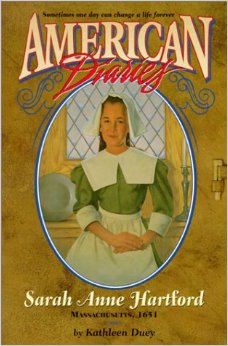 This book is 142 pages long and contains maybe 6 pages worth of actual plot. Every single thing that happens is streeee-e-e-e-e-etched out with wildly dull descriptions. There’s like a whole chapter devoted to “Sarah cooks dinner.”

So, the book opens with a single-page “diary entry” that reads like knockoff Dear America fanfiction, and then we’re into the plot. It’s Sunday, and Sarah is at Meeting with her father, and it’s cold and she’s bored. Sarah is thirteen and an only child, her mother having died a few years beforehand. Her father is thinking of remarrying a widow, Mistress Goddard, whom Sarah dislikes because she used to run the school and she’s strict.

Point: Sarah and her friend Elizabeth bang on a lot about how they’ll be married “soon” and “in just a few short year,” but Puritans generally did not marry until their 20s or so. Almost certainly they would both have several years to wait. Already I’m straying off topic.

Sarah’s friend that I mentioned, Elizabeth, wants to walk home with her from Meeting, and Sarah’s father agrees, so off they go. It’s cold, and Elizabeth’s older brother Roger lends Sarah his yellow coat, and they wander off on one of the side roads even though it’s steep and it’s freezing and snowy. This is where we learn that Elizabeth is “willful,” etc., and they chat a little about Anne Hutchinson and the minister’s sermon. But because they’re 13, they get distracted by falling around in the snow, and one thing leads to another and eventually they’re tumbling down the snowy hill and committing the cardinal sin of enjoying themselves on the Sabbath day. And they turn around and who’s there to see them? Mistress Goddard! Of course!

Roger comes across them at this second too, and says that they’ve been too long and they had better get going. Elizabeth and Sarah exchange some ridiculous glances and then stumble off home. This whole book is so weirdly written that it’s almost difficult to figure out if they’re going, or staying, or what. Anyway, Sarah gets home and her weirdly-intense father is like “What on earth kept you?” and she just says it was snowy. They have dinner guests—Mistress Goddard, whom Sarah is deathly afraid has tattled, and another two people from the village.

Sarah’s father tells her to go and change her wet clothes and make dinner for everyone, and says that he’s very proud of her for….whatever it is. Turns out, Mistress Goddard said she saw Elizabeth and Roger playing, and Sarah’s father thinks that she just came straight home rather than encouraging them in their nonsense. Then there’s EIGHTEEN PAGES describing how Sarah makes dinner. Granted, it’s while she’s all caught up in Inner Turmoil, but still. EIGHTEEN PAGES.

It goes like this. “First, she would boil water for the samp. She lifted the full piggin to the wooden hearth shelf, placing it far to one side, where he sleeve could not catch the long handle-stave and spill the water. She reached up and took down the dipping gourd. Deftly, she slid it in at an angle beneath the water’s surface in the piggin, then raised the gourd full and dripping. With a little swoop of her wrist, she shook the droplets free, then carried it cleanly across the hearth to the small iron saucepan.” Oh Lord. There is no book where we need to have the character’s every single action given to us. “She reached up. She carried it.” And it goes ON and ON. Also at one point she’s described as getting out sweet potatoes, and while sweet potatoes are indeed native to the Americas, they are tropical plants and would almost certainly not have been grown or eaten much by Puritans.

Anyway, after that excruciating interlude, Sarah’s father shows off her sampler and tries to impress Mistress Goddard, but she’s too busy slamming Elizabeth and Roger’s family to really absorb any of it. And after they finish eating, the Tithingman comes by (seriously—nothing is explained in this book—at least in the Dear America books they have a section at the end that talks about life in that era, and maybe a glossary of terms. But in this book they’re just throwing around references to tithingmen and Anne Hutchinson that your average 8-12-year-old would not know!) and asks Sarah to come to the meetinghouse first thing next morning for A Discussion.

It’s about the others, of course, and everyone leaves and Sarah passes a very fretful night worrying about what to do. The reverend and the tithingman meet them there, and they ask Sarah to tell them what happened and basically, to rat on her friends. She keeps thinking that now is the right time to say something, but she keeps getting interrupted or she’s just so quiet that they don’t even notice she’s talking, and then they sweep her out all “OK, we’re done here! Now to interview the guilty parties!” But Roger takes the fall for his sister, saying that it was all his idea, and they give Roger five lashes and BOTH of them FIVE HOURS in the stocks!

Note: They keep saying “stocks” but from the way they refer to it, they actually mean the pillory. I digress.

Sarah is horrified at how harsh they’re going to be, and Elizabeth and Roger’s father is almost on the verge of panic himself. But she still says nothing while her father takes her along to Mistress Goddard’s house, trudging along in the snow, and informs her that he’s planning on marrying the widow. He leaves her with Mistress Goddard and goes…somewhere, it’s never explained where, and leaves them to get acquainted. This mostly consists of Mistress Goddard telling Sarah how awful her friend is, and how they’re doomed, and Sarah finally loses it and bolts back to the meetinghouse where they’re getting ready to stick Elizabeth and Roger in the “stocks.”

She goes to the reverend and confesses that it was her, not Roger, and he’s all “Hmm. Well, into the stocks with you then, too,” but it doesn’t stop them from whipping Roger. Her father just stares at her and leaves while they lock them in. Elizabeth is angry at first, and then they begin succumbing to the cold, since it’s February in Massachusetts. Eventually Elizabeth starts…nodding off, or passing out, or beginning to succumb to hypothermia or something, and just in the nick of time Sarah’s father turns up. He frees all three of them and takes them home, and apologizes for being cruel, and tells her that he isn’t going to marry Mistress Goddard anyway. The last page is a diary entry where Sarah says she wants her children to grow up somewhere “where there are no ministers to punish them.”

Note: The entire plot of this book hinges on the idea that someone mistook Sarah, wearing Roger’s yellow coat, for Roger. In the middle of a wintry forest. Now, granted, even it takes place at dusk, I find it extremely hard to believe that anyone—especially a born-and-bred Puritan woman—would mistake a young girl wearing her usual garb of a long dress and a coat, for a young man wearing breeches.

Rating: D. Ugh. This book has no redeeming value. It goes on for way, way too long (which is saying a lot, considering that it’s under 150 pages), has endless run-on scenes where every single little action is described (we don’t need to know how she took the spoon and reached across and stirred the stew and tapped it on the side and put the spoon back down and so on, it’s like there was a target word limit), and the plot is paper-thin. All of the characters are completely flat (Sarah is meek, her father is stern, Goody Goddard is mean, Elizabeth is feisty, Roger is brave) with zero development, and the entire premise of this book seems to be “Look how bad things were in Puritan times! Look! Look at it!”

Considering how awful this installment was, I’m considering delving into the penny section of Amazon to see if I can track down some others. Let’s see what happens.