One of the only subjects to have a Dear America, Dear Canada, and My Name Is America book each on the topic is Japanese internment. However, the way it’s treated in each book is vastly different. Last week we did the (horrible) Dear America relaunch, and last year we did MNIA. Let’s see how Dear Canada does with it. (Spoiler alert: This is the best of the three.) 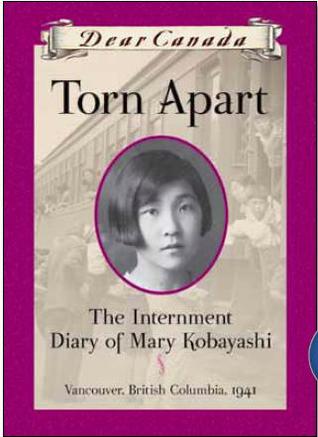 The fact that Canada interned its Japanese citizens is one of its most horrible chapters, but there are very few books focusing on it for a youth audience. This is Aihoshi’s first novel, and she’s really doing yeoman’s work in producing a great and engaging novel without descending into melodrama. She is a third-generation Japanese Canadian herself, and her own grandparents and parents were interned during the war, which lends it a certain poignancy. It’s head and shoulders above either of the other attempts at novels on internment, and even the really minor quibbles I have with it have nothing to do with the central message of the book.

The protagonist, Mary, is twelve years old and lives in Vancouver with her parents, grandfather, and five siblings. She’s very bubbly and outgoing, which is nice to see, expressly because lots and lots of YA protagonists are bookish, shy, and nerdy. (I get why—that is their primary demographic, and I was a bookish and shy kid myself—but it’s really nice to see a character who’s super outgoing for a change!) She has three best friends (one Japanese, two white), and she gets a bunch of cool presents for her birthday: bobby socks and pencils and sparkly barrettes and Maple Buds (that’s a candy, American friends) and a Hollywood magazine and a little camera. Her parents have agreed to let her go berry picking over the summer to earn money to go to Girl Guide camp, and it generally seems that life is pretty damn perfect for her.

They’re all aware that there’s a war going on, with blackout drills and air raid drills and so on, but it really doesn’t affect Mary’s life all that much. She’s more concerned about going to baseball games with her family, playing tennis with her friends, going to Guides meetings, and planning for Guide camp later that summer. She does worry that her oldest brother Tad wants to enlist as a soldier, but Canada isn’t keen on the idea of taking him as a Japanese-Canadian, so it’s not that much of a problem right away.

When Mary returns from Guide camp, she’s a bit freaked out that all Japanese have to carry identification cards with them at all times, but what upsets her more is that when school starts in the fall, an annoying boy in her class keeps pulling his eyelids at her and calling her “chop suey.” She’s bummed, and frustrated, but still nothing really manages to worry her until the attack on Pearl Harbor. Then suddenly her father’s boss tells him to take a few days off, the navy is seizing fishing boats everywhere, the government is shutting down all of the Japanese-language newspapers and schools. But in spite of all this, Christmas is still coming, and they try to make it cheery for Mary’s little brother, Harry. It’s useless, though, as they’re all deeply worried about what’s going to happen next.

For New Year’s they have a big party, and most of their friends come by, and when Mary comes back to school she thinks things are feeling a bit more chill. And then the worst news is that by the end of January, all “enemy aliens” are being forced to leave from the coast, and Mary is afraid her grandfather will be forced to leave. Their friends are being sent away, and by the end of February the government seizes their cars and radios and cameras along with a night curfew. A couple of weeks after that and it’s all property and belongings and they’re hearing the first whispers that all Japanese, including naturalized and Canadian-born, will be sent away as well.

They do end up sending Mary’s grandfather to a road camp somewhere in the Rockies, which is of course completely horrifying—that an elderly man to be forced to do hard labour away from his family?  Awful. One of Mary’s brothers is unemployed and she frets that they’ll take him away as well, kids are harassing Mary and Harry in school, and then Mike (the unemployed brother) gets his orders to leave. Soon they sell their car and aren’t allowed to travel anyway, and then it’s all Japanese men who are being forced to report to the police.

Their friends from the coast are being forced to live in Exhibition buildings with hundreds of other people before being sent to another camp somewhere, but nobody seems to know where. Mary’s other older brother, Tad, volunteers to go to a work camp in Ontario rather than wait to be forced out, and Mary’s friend Sachi’s father is sent away as well. When Mary’s father is fired, she thinks the worst is really coming. Her sister Kay goes to work as a companion for a wealthy older woman, which helps to pay the bills, but by the time the school year ends Mary is horribly depressed at how her big family has shrunk down to just her parents, one older sister, her, and a little brother.

Then in July they get a letter saying that Mary’s grandfather was taken to hospital in May, but the mail is so slow that it’s only just reached them. Her father is panicking trying to find out what’s happened to him when Mary learns that Sachi’s entire family is being sent away as well. Then they find out that Mary’s grandfather died before he even reached the hospital—he’s been dead for almost two months and nobody bothered to tell his family. “I was furious when we found out about Geechan, but Papa is so devastated, I could only cry. No one ever said how much it hurts when someone you love is gone forever.” There are some really lovely sentences scattered throughout this book.

When it comes time for school in the fall, Mary and her siblings can’t go back to school. They’re blocked from all the schools—elementary, middle, and high. And then in the beginning of October, they get the word that they have to leave their home. They give their dog away, pack up what they can and send away their most precious things to family in Montreal, and go to live in some rooms above her mother’s old office until they hear what will happen to them next.

Unfortunately, what does happen next is that Mary’s younger brother Harry gets sick, and her father is taken away for questioning the same day that Harry has to go to hospital. So it’s just Mary and her older sisters who are sent away to a ghost town called New Denver, alone, because why would some kids need their parents, right? But they’re packed off on the train and end up in a wooden bunkhouse in the middle of nowhere where there’s a foot of snow on the ground in October.

The good part of arriving there is that her brother Mike is there as well, working on building some cabins, but he had no idea either that they were arriving or that their father has been detained or that his brother is in hospital. There’s nothing for Mary to do since there’s no school there yet, so she wanders around and ends up befriending one of the local Doukhobor kids and helping out some of the other families they know from Vancouver. Eventually, Mary’s older sisters are hired to teach school, and her mother and brother come out at the end of November to join them. By the end of the month, Mary’s father is finally released to them as well, and they get their own cabin. Luxury.

The book ends somewhat abruptly at the end of January, when they’re all at the end of their food rations, running low on wood, and unsure what will come next.

In the epilogue (which is unusually long), New Denver becomes a bit more of a real town, with electricity, running water, and a real school. Mary’s sisters go to Toronto to work, and the rest of her family follows them there after the end of the war, where Mary goes to the University of Toronto and becomes a teacher.

Rating: B-. I really, really, really struggled with the rating on this one. I really want to give it a higher rating! Here’s the thing: the issue of Japanese internment is handled with grace and sensitivity, and Susan Aihoshi’s family history with the detainment shines through on every page. It’s reasonably well-written (my only minor quibble being that there’s a bit of Exclamation Point Abuse!!!!), and Mary is a well-drawn, happy, outgoing girl who isn’t fully aware of what’s going on. It’s a nice portrayal of a girl who doesn’t fully understand what is happening or why, but I would argue that it lacks real depth and relies too heavily on telling-not-showing. But ultimately, the redeeming factor is that the story has a lot of heart and feeling, and Aihoshi has so much promise as a writer that I’m granting it a pass. I absolutely can’t wait to see what else she comes out with going forward.

One thought on “Torn Apart”