It’s time for another compare-and-contrast between a Dear Canada and Dear America book. This time: Western settlement!

A Prairie As Wide As The Sea: The Immigrant Diary of Ivy Weatherall, Milorie, Saskatchewan, 1926, Sarah Ellis, 2001. 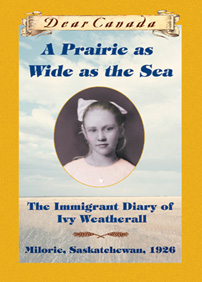 It’s Sarah Ellis again, whom I love! She is fantastic, and this book is fascinating. Next week we’ll cover Dear America’s book on the same topic and discuss the similarities and differences. Both books are about English immigrant girls from lower-middle-class families who come to the prairies after buying into promises of untold wealth for the hardworking. Spoiler alert: things do not go as planned.

Ivy is eleven years old, has an older brother William and younger twin siblings Gladys and Harry, and is initially not very enthused about leaving London and her family, best friends, and their little house. Her aunt gives her a copy of Lost in the Backwoods, which Ivy takes as a Bible of Canadian life, even though it’s a novel about some kids who get (duh) lost in the backwoods and have to survive eating bark and stuff like that. Unlike some of the other ship-crossing narratives, though, Ivy and her family go by steamship and are duly impressed by how luxurious, fast, and enjoyable it is.

Unfortunately the train from Quebec City to Saskatchewan is not nearly as fast, and listen: as someone who has driven from Edmonton to eastern Ontario, I cannot imagine doing it on a 1920s train. I would claw my own eyes out. It was hard enough by car doing 120km/h, I would cry if I was doing it on a train with a couple of 6-year-olds to look after. But after several days (yeccch) of travel they make it to Milorie—a small town where Ivy’s Uncle Alf and Aunt Millie have settled in a sod house with their infant son. Ivy is somewhat horrified at the prospect of living in a house made of dirt when they’ve just left a cozy brick home in London, but she likes having her aunt and uncle nearby and she likes the look of the place.

William finds out pretty quickly that Alf owes money to every shop in town, rents his farm, and is generally a bit of a low-life. But Ivy befriends a nearby girl, Elizabeth, and learns how to churn butter. “Here is something I didn’t know. Butter is made from cream and WORK…Churning is not fun.” Preach it. William takes a job working at the counter in the general store in town, but Ivy’s father has trouble finding permanent paying work and ends up taking whatever little jobs he can find. Ivy’s mother takes in a number of chickens from the local Chicken Lady (for real) in an effort to earn a little extra money with eggs.

Like Sarah Ellis’s other books, this is not a book with a ton of dramatic plot developments. By and large, it’s a story about a family trying to make a go of it in a new and foreign place, and Ivy’s various trials and tribulations with her mother, school, friends, and so on. It’s great, don’t get me wrong, but it’s not the most thrilling of stories, and I mean that in the best possible way. It’s realistic in that the majority of issues faced by English immigrants were lack of work and irritated locals, and it’s interesting to contrast with stories about immigrants from non-English-speaking countries with an entirely different set of issues.

The Chautauqua circuit comes to town, which is Ivy’s first real experience with North American parades/fairs/etc., but shortly afterwards her aunt Millie comes to stay with them for a bit. Ivy overhears (fine, eavesdrops on her parents) the discussion about how Millie is suffering from depression, which Ivy’s dad attributes to having to live with Alf, who’s constantly in debt, lies to everyone, and so on, but Ivy’s mom (who is, after all, Alf’s sister) says is that Alf and Millie aren’t “the pioneer type” and shouldn’t have left England to begin with.

At the Canada Day celebrations, Ivy tries a banana for the first time and has her first ride in a motor car out on the prairies, and later that month she and Elizabeth enter a jelly into the local fair. But shortly after that, Millie and Alf and their baby go back to England, because clearly they are not cut out for Canada. Ivy thinks she may want to join them, but who really wants to go with them is her poor brother William—Ivy notes that he’s become very “blinky” and pale and nervous since they got there—the other boys his age make fun of him and he doesn’t fit in and generally wishes they were all back in London, all the time. Poor kid.

And then the following week, Ivy is out with Gladys picking berries when a thunderstorm comes up suddenly and begins hailing on them, and Gladys can’t walk through the ice piling up without slipping, and Ivy tries to shelter her with her body while being beaten half to a pulp by hailstones before—of all people—the Chicken Lady shows up to cart them home. “When I was trying to protect Gladys from the hail I thought we were both going to die. I don’t want to think about this anymore.”

But in between major catastrophes, Ivy’s problems are mostly along the lines of “sassing her mother” and “accidentally breaking things,” as are the problems of most 11-year-olds. In the fall she starts school along with the twins and is excited that she’ll be able to ride a horse to school, has a nice teacher, and gets to sit with her best friend. She even has an enemy—the snobby rich girl Nyla Muir (what a name Nyla is!). The following month the boys are all out of school helping to bring the harvest in, and Elizabeth’s older brother Gerhard declares that he’s never going to farm another day in his life—and then shortly afterwards up and leaves for Calgary.

Trouble on Ivy’s home front as well, as her dad declares that they’ll be moving into town to run a hotel instead of making a go on the prairie. At the end of October, while Ivy’s parents and William have gone to town with the furniture, a snowstorm rises up suddenly and Ivy is left alone with the twins and not enough coal. So she gets an axe and chops up the furniture, including the rocking chair her mother brought out from England, to stay warm. It’s very The Long Winter, or possibly On The Banks Of Plum Creek, where Laura hears a story about a couple of children left alone in a blizzard who burnt up all the furniture in order to stay warm and died anyway. (Or were they in a schoolhouse and burned the desks? My Laura Ingalls Wilder card ought to be revoked for this.)

But the move into the hotel goes relatively smoothly and they get a couple of long-term boarders, school goes relatively well for Ivy, and her father gets regular work at the livery stable. The school puts on a Christmas concert, Ivy’s family gets a big box from their family in London, and it makes her a little homesick to realize that her younger siblings aren’t going to remember England at all—they’ll just have the stories.

In January, one of Ivy’s classmates cuts his ear open bashing his head into a pole (boys), and needs a set of stitches. Ivy’s mother assists the doctor, since she was a midwife in England, and Ivy is desperate beyond words to watch. She’s fascinated by it but a little frightened of the blood, at first. (This is foreshadowing.)

Later in the spring there’s a poetry contest that Nyla Muir wins, and Ivy discovers Nyla stole her poem from an old newspaper. This is EXACTLY the same plot that’s in Emily Climbs by L.M. Montgomery, where Emily discovers the winning poem had been copied out of an old anthology. And just like in Emily Climbs, Nyla doesn’t get into any trouble, and I suppose the lesson of this is “Sometimes, people suck.” Which is true, but depressing.

Later that spring, Ivy’s mother is called to help with a birth since the doctor is away, and Ivy goes with to help. It’s literally life-changing—Ivy is amazed at how hard and scary and joyful and amazing and wonderful it all is.

In the epilogue this is a foreshadowing to Ivy’s career of nursing—she goes on to become a registered nurse and later to become a professor of nursing at McGill and own a succession of flashy sports cars. There’s not a word about her marrying and having children, and I kind of love it.

Rating: B+. This is a terrific book. I’ll knock it down one notch from an A for not being incredibly thrilling, but I personally see nothing wrong with that. It’s fascinating to see how Ivy goes from comparing everything to the way it is in England, to becoming Canadian herself. I think Sarah Ellis’s characterizations are as excellent as they usually are, and I think she does a terrific job of writing a kids’ book with an undercurrent of some deep, upsetting themes (leaving home, never having enough money, feeling unwelcome in your new country) that don’t overwhelm the main story.

Next week: compare and contrast!

7 thoughts on “A Prairie As Wide As The Sea”