This is a Royal Diaries book I’m reading for the very first time while reviewing, and I’m not sure how I missed it on its first publication. 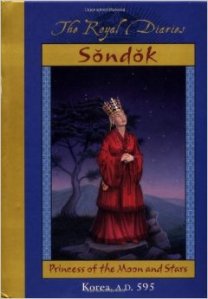 To start with, I have to freely admit that my knowledge of Korean history is sadly, embarrassingly lacking. I had to do a quick Wikipedia visit to familiarize myself with the actual historical Sondok (also transliterated Seondeok), a reigning queen of Silla, which was one of the Three Kingdoms of Korea. Silla lasted for 992 years, and I would venture a guess that the amount of time spent on it in an average history class is about zero minutes. I have two degrees in history and I had not heard of Silla before reading this book.

Now that we’ve talked about how my lack of knowledge probably contributed to why I didn’t read this book in the first place, let’s get started.

Sondok doesn’t keep a journal, per se, but writes on parchment that goes into the Ancestor Jar of her recently-deceased grandmother. She already knows at this point, as a teenager, that her father intends to make her his heir since he has no male sons, and is desperate to make herself worthy of his decision. She loves stargazing and astronomy, but this is considered a male science in Silla, and not something she should concern herself with—which is upsetting to her, understandably so.

She has two sisters who seem to not be as bothered as Sondok is by their restrictions, and have very little sympathy for her. An ambassador from China, Lin Fang, has come to visit their court, and announces that there will be an eclipse in the fall, which Sondok says cannot be. When Sondok tells him this, he starts slamming the Silla court and basically saying that a young woman can’t possibly know anything about astronomy and Sondok has embarrassed her family. Lin Fan says that it would be wrong for a woman to rule, and eventually ends up offering to tutor Sondok and her sisters.

This is basically the worst thing that could have ever happened to Sondok, in her opinion. She is forbidden from studying astronomy and Lin Fang gives her an enormous pile of work that she can’t possibly complete, and she runs herself ragged trying to finish it all. The theme of this book is pretty generally “Young woman is horribly strained by the pressure of a male-dominated society and beats herself up trying to do it all,” which is pretty prescient. “There has never been a queen of Silla. What if our enemies use my reign as an excuse to attack? What if the nobles rebel against a feminine head of state? What if my wretched body is the means by which our kingdom is destroyed? Sometimes I can hardly bear the strain, Grandmother, and I suffer such blinding headaches…”

That’s some heavy stuff right there.

Sondok’s mother, the queen, is expected to tend the silkworms for part of their season to set an example for the commoners. She enlists Sondok to come and help her, and Sondok consequently misses one of her lessons. When she goes to see Lin Fang, he tells her that clearly the silkworms need her more than she needs to learn. She goes back to tending the silkworms reluctantly, completely miserable, and ends up completely telling off her mother and saying she has more important things to do than look after worms. Having successfully aggravated everyone, she retreats to her room and tries to figure out WTF just happened. “I don’t know why I hate women’s work so much, Grandmother. Logically, I know there is nothing shameful in it, but somehow I feel that if I do what is expected of me as a woman, I will lose the little, insecure foothold I have in the world of men.” Again: heavy.

Eventually Sondok apologizes to her mother and Lin Fang and is allowed to go back to her studies, but she’s not particularly enthused about them. Unsurprisingly. Sondok really has a crappy hand dealt to her, here.

Later that summer, Sondok runs into her old friend Chajang, who has become depressed and withdrawn after accidentally wounding a pheasant while hunting. After tracking her down to kill her, he found that she had a nest of baby chicks, and Chajang has an epiphany about the nature of hunting and killing indiscriminately. Unfortunately, Chajang is intended to be one of the warriors for Sondok’s father the king, and she correctly foresees this as becoming a problem, as few successful warriors are driven to tears by wounding a pheasant.

The following week they go for a ride together and Chajang confesses that he’s planning on entering the Buddhist monastery. Sondok is crushed at losing her best friend, and when her father hears about it, he is so upset that one of his warriors wants to join the monastery that he orders him put to death. Sondok tries desperately to intervene, and vows that she will put away all of her astronomy supplies and be “a dutiful Confucian daughter” if Chajang’s life is spared. It is—Sondok is devastated that she can’t even wish him goodbye—but she puts away her things and tries to be the good daughter her parents want her to be.

It turns out that being a dutiful Confucian daughter totally sucks and is boring, though, because Sondok spends all her time being a good student and practicing music and “courtly dancing” and praying that her father will have a son. This lasts for a couple of weeks until it Sondok finds that her prayers have been answered in the guise of her father setting aside her mother and taking a new wife. Holy crap. It’s because Lin Fang has been urging him to have a son or else, basically, other countries will laugh at him. Sondok’s mother has no choice but to enter a monastery herself, and Sondok and her sisters are again, devastated.

There is an annual weaving contest that Sondok and her sisters are supposed to participate in by leading teams of women, and Sondok tries to get out of it, but her mother won’t let her. Instead, Sondok weaves a tapestry with a pagoda, a stargazing platform, the constellation depicting the royal house of Silla, a book, and a peony in bloom. “Staring at the tapestry that I had unconsciously woven, I realized I have all of those things within me: royalty, and scholarship, and religion, and astronomy, and even weaving—women’s work I once hated. This newfound knowledge feels like a weak, green rice shoot, easily trampled or destroyed…”

Sondok’s mother leaves for the monastery and her father’s new wife, who is barely older than Sondok herself, comes to stay. Seung-man, the new wife, does her best to get Sondok and her sisters to like her, and Sondok at least realizes that Seung-man doesn’t particularly want to be queen—she’s a pawn of her family and had no desire to put the queen out. Sondok is torn—she genuinely likes Seung-man, or she would if she wasn’t her new stepmother—but she misses her mother so extremely and can’t quite let go of her anger at her father.

The day that Lin Fang predicted for an eclipse draws near, and Sondok is firm in believing there will be no eclipse. But because her father is under Lin Fang’s influence, an observation platform is built so the king can perform the necessary eclipse rituals. And everyone goes to watch the eclipse—which, unsurprisingly, does not come—and when Sondok sees that her father is about to be humiliated in front of his people, she declares before everyone that the king has intervened and forbidden the eclipse to occur. “How powerful then is the king of Silla!” she shouts. Lin Fang nearly loses his shit in anger, because he is a jerk.

Sondok decides that she can’t live without her astronomy, and goes back on her promise to put it away forever. Eventually she is gratified to see Lin Fang’s influence on her father fade, but grateful that he was able to give her some insight into the minds of her enemies—and she vows that she won’t ever allow an outsider to interfere in what she thinks is her true fate.

Sondok’s real fate is fairly shrouded in mystery, but she did ascend the throne in 632 and rwas the first reigning queen of Silla or indeed in all of east Asia. Chajang returned from the monastery to help defend Silla, and together they built a series of temples and monasteries. Sondok built the Chomsongdae, a stargazing platform that is still in existence in South Korea, and was most famous for her prophecies.

Rating: A. I have no complaints with this book. I could have argued that it would have been great to have it be written by a Korean author, but I don’t know of a single other book about ancient Korea for young readers and for that reason alone I think this book should be far more well-known than it is. Well-written and entertaining while being depressing as hell (which is true of all Royal Diaries books), this one is great.

4 thoughts on “Sondok, Princess of the Moon and Stars”