One day I will stop doing books from the Dear America series and spinoffs, but it is not this day. It is probably not until next week. 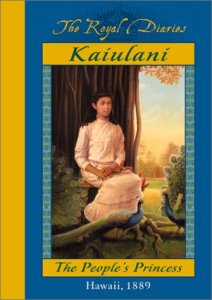 This is one of those books I never read as a kid, so I read it for the very first time in my twenties, and I’m not sure how much I would have enjoyed it as a kid because it’s damn depressing as hell. It’s very well-written, Ellen Emerson White is doing her thing with snappy characters and sharp dialogue, but the subject matter is just so intrinsically depressing! Okay, let’s go.

This is (unsurprisingly) about Kaiulani, the last royal Hawaiian princess, and opens in 1889 in Waikiki, Oahu, before it became the most sought-after honeymoon destination on the planet. Kaiulani’s mother died two years previously and now that she is a teenager, her father is sending her to England for schooling, since she is destined to be queen one day. Kaiulani is half Hawaiian and half Scottish, as her father is from Scotland, and I’m reasonably certain that this is the only Royal Diaries/Dear America/etc book about a mixed-race character.

One of my favourite things about the Royal Diaries series is their willingness to focus on non-white characters. Nine of the twenty books are about non-white non-European royals (ten if you count Cleopatra, whose lineage is unclear, and could probably be counted in either column), which is a really terrific percentage for a young-adult series focusing on princesses, and includes a Mayan queen. That is awesome and I fully want to support any series that improves the visibility of non-white people in YA fiction.

But getting back to Kaiulani and her tragic life (because lest you forget for one minute this is a Royal Diaries book, tragedy lurks on every page). She has three older half-sisters and some cousins she adores, lives on a tropical estate with peacocks roaming everywhere, and spends most of her time going to royal engagements and riding her pony. So initially I’ll understand if you have trouble empathizing with her, especially if you, like me, are suffering through the depths of a Canadian winter and spend every morning chipping ice off your car so you can drag yourself to work. Kaiulani is only vaguely familiar with the political unrest in Hawaii, which centers on the division between the Royalists, supporters of the native Hawaiian monarchy, and the Reformers, who are Americans bent on colonizing the islands for sugar plantations. Normally I would say spoiler alert, but anyone who’s familiar with the fact that Hawaii is an American state knows how this ends.

Kaiulani and her family are also friends with Robert Louis Stevenson, and I knew not one single thing about Stevenson before reading this book, because the only thing I ever read by him was Dr. Jekyll and Mr. Hyde in eleventh grade and I hated every minute of it. But apparently he really was a fairly sickly man and went to Hawaii for his health before dying in Samoa at forty-four. So never let it be said that these books never teach us anything. Unfortunately, I got tired of him pretty quickly in this book because I was more interested in Kaiulani’s trip to England and less interested in them noodling around talking about books and England and the mouse that lives in Stevenson’s cupboard.

The tragedy in Kaiulani’s past is that her mother died when Kaiulani was just eleven, after refusing to eat anything and more or less wasting away. Just before her death, she predicted that Kaiulani would never become queen and never marry. This is part of the reason Kaiulani doesn’t want to leave Hawaii—she doesn’t want to leave her family since she misses her mother so much. The other, larger part of the reason being that she has no desire to visit England in general, and it’s hard to see why she would. Her entire conception of Britain is either her father telling her about Scotland, where it is cold and damp for a good part of the year, or reading about it in novels, which portrays London in particular as a cold, damp, smoky hellhole. (Anyone who has read Dickens will know exactly what she’s talking about, so no arguments here.)

But she has no choice, and her father packs her off with her older sister Annie to keep an eye on her. She spends the entire trip seasick and utterly miserable, and the whole thing is so depressing you can’t blame her. She doesn’t recover until they’re nearly to England, and once she sees Liverpool she starts crying again because it looks like England is going to be everything horrible she’s imagined it to be. I am 99% sure that Liverpool in 1889 was just as gritty and smoky and depressing as we’re all imagining.

It turns out that Kaiulani hates her school, too, unsurprisingly. Her classes are hard, the only person she knows is her sister, the food is terrible, and England is far, far colder than anything she’s ever experienced. Although she eventually comes around to befriend some of the girls and enjoys her classes, she gets frustrated with her family’s reluctance to send her news of anything important. Her uncle, the King, dies, and her aunt has become the queen Liliʻuokalani, but they leave Kaiulani in England without any news.

Although she moves to Brighton to study with a private tutor, she is in her fifth year in England when she hears the news that the Queen has been deposed and the Hawaiian monarchy abrogated, or repealed. Kaiulani is no longer a princess, but rather only a wealthy young woman. Americans in Hawaii had planned a coup, with the end result being that it was claimed that Americans in Honolulu were in peril, and Marines were ordered to surround the Hawaiian royal palace. Lili’oukalani’s indecision and desire to avoid bloodshed incurred a huge amount of ill will among the other Hawaiians, seeing it as weakness.

Kaiulani goes to Washington to speak on behalf of the Hawaiian monarchy, and even though she makes several speeches and even has a private audience with President Cleveland and his wife, it ends up being all in vain. Although the diary ends on a somewhat positive note, with Kaiulani heading back to England hoping for the best, nothing comes of it. Hawaii is annexed to the United States. Kaiulani remains in Britain, suffering terrible migraines, until the sudden and unexpected death of her sister Annie at age twenty-nine. Kaiulani herself died in 1899—fulfilling her mother’s prophecy that she would never marry and certainly never become queen.

Rating: A. I didn’t want to give this one an A because it’s so damn depressing, but it’s a great book and Ellen Emerson White does a great job. Like several of the other Royal Diaries novels, it focuses on a girl whom most American girls have little to zero familiarity with, so it gives her a nice character to focus on while talking about Hawaii’s annexation to America. Although it doesn’t get into the gory details, it’s a nice intro and a depressing, worthwhile book.

3 thoughts on “Kaiulani: The People’s Princess”