I haven’t done a book about a boy yet, and I happen to have this one out from the library, so let’s start with it. 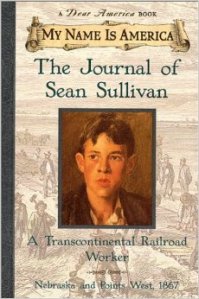 Why did the My Name is America books not get decent titles? This book already sounds like it’s going to be more boring than fishing cat toys out from under the stove for the 33rd time today. My personal theory on the MNIA books is that they never took off not because boys don’t like to read, but boys don’t like to read boring books, and this one doesn’t even sound interesting.

Sean Sullivan is a teenager, and his father is taking him to work on the railroad for the very first time. Sean’s mother has died, so I’m assuming they don’t have any reason to stay in the East, and so Sean is very enthused to start earning a wage. On page nine he meets a prostitute in the street and gets scared, so maybe this book will shape up to be slightly more interesting than the cat toy thing.

Apparently Sean’s mother was a teacher who taught Sean and his brother John (those are….the same name, but all right) about how enjoyable literature was, and got Sean hooked on writing. So when his mother died in childbirth, he wrote about it and how much he hated his dad for going off to work on the railroad and leaving him with his aunt and uncle. I cannot blame him.

Sean starts off as a water carrier, and it is miserable, hot, heavy work. The excitement comes in at night when the men get drunk and rowdy, and one evening a bullet cracks through their tent and almost hits Sean in the head. The other excitement comes in with the weather, and the next day they have a monstrous storm as is the norm for Nebraska in August.

[I have to admit that at this point this book was boring me so badly I took a break to clean my entire house.]

As they move on, Sean gets promoted from water carrier to dish scrubber, and we learn the neat fact that because the work train moves so often and so awkwardly, the dishes were constantly flying everywhere, so they nailed the plates to the table. So instead of the dishwasher having the dishes come to him, he runs up and down the dining car scrubbing the dishes. That sounds like a shitty job, but somewhat better than water carrier, I suppose. Sean notes “The longer I work in the kitchen, the more amazed I am that somebody doesn’t die of an awful disease.” That sounds like something that would come out of Kitchen Confidential, honestly.

To get out of scrubbing the disgusting nailed-down dishes, Sean volunteers to help butcher animals, and finds out that the butcher Jimmy is horribly disgusting. He’s also pretty cruel to Sean, to boot, so maybe volunteering to butcher wasn’t Sean’s greatest idea.

The men on the railroad seem to entertain themselves by fighting amongst themselves, mostly. Irishmen versus Irishmen, Irishmen versus local Indians, pretty much every variation on inter-ethnic conflict that’s available. Sean cuts himself cutting up a cow and has to see a female doctor. This book is so boring.

Sean’s dad isn’t a drinker, but one day he goes out and gets absolutely loaded, and when Sean thinks he’s abandoned him—he comes home and tells Sean that today had been his wedding anniversary. We’re only on page 52 and this book has already depressed me.

Anyway, Sean gets promoted to working on the grading crew, and I have a sinking suspicion this is a secret educational book on “how the railroad was built.” Mostly he hangs around the older men who spend their time talking about what they did during the Civil War and alternating getting drunk and fighting. Or doing all three at once.

We learn a little bit about the process of building a railroad in the winter and how difficult it is to lay flat track, because of the way the earth freezes and thaws and warps seasonally. Although everyone knows it not because that’s where potholes come from, I suppose it would be new information to a 15-year-old learning how to lay rail, so I’ll let it slide.

They make it into Wyoming and on towards Utah, and Sean notes on the concept of polygamy, “I can’t see how one man could keep track of [a dozen] ladies, much less keep them all happy.” A good question. Since they’re working across the desert in August, men and pack animals alike are dropping like flies from heatstroke and exhaustion and inhaling too much alkali dust or whatever is out there. They’re racing against the line coming from the West and laying two miles of track per day, which is an ungodly rate considering they’re doing it by hand.

Randomly at one point Sean refers to his late mother as “Mom,” which is weird because at every other place she’s referred to as “Mother.” I’m not sure if this is intentional or a slip-up, but it’s weird.

Things continue to go downhill on the track, as the railroads slip behind on paying them first two weeks and then a month. Men who are working that hard and not getting paid tend to get a bit ornery, and the drinking and fighting gets worse and worse, and when the rail newspaper publishes a nasty article about Ulysses Grant, all the ex-Union Army soldiers lose their minds and a huge riot breaks out. Twenty-five men are killed and several dozen more wounded, and Sean can’t figure out why the railroad wants to keep it all hush-hush. (Really? You can’t figure out why a company wouldn’t want a riot of its employees to be headline news? Why ever not.)

Just after Christmas that year there’s a rail accident and Sean is promoted to a spiker. He keeps getting letters from his younger brother, who’s in school back in Chicago with their aunt and uncle, and mourning how he can’t go to school and learn any more. Later that spring the Union Pacific rail workers set off a charge that kills three Chinese miners coming from the West, and then laugh about it afterwards. I think the moral of this story is “Sean learns how life sucks.”

That May the two rail lines meet at Promontory Point, in the story beloved by many high school textbooks, and are joined by a golden spike. Sean and his father have finished and head back to Chicago, and Sean reflects for a bit on how no one is ever going to remember the workers who built the railroad. Which is true. The end.

Rating: C-. This book is ungodly boring. If these books never hit it off among boys, it wasn’t because they were poorly-written (it is absolutely not), it’s because they’re boring as all get-out. There must be a better example of YA historical lit aimed at boys, but this is not a good one.

5 thoughts on “The Journal of Sean Sullivan”